Federated Farmers is taking a close look at the Health and Safety Reform Bill, now before a Parliamentary Select Committee, to see what is in store for farmers. 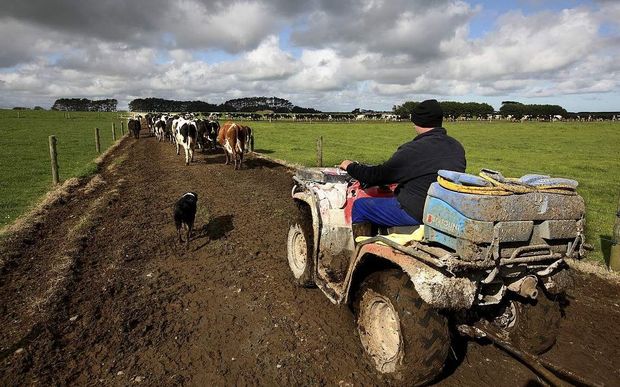 WorkSafe said in May that an average of five people a year were killed in quad bike accidents on farms, and a further 850 injured. Photo: PHOTO NZ

The Federation's health and safety spokesperson Katie Milne, who made submissions on the Bill yesterday, said it was on every farmers' radar, because they were concerned about just how far their health and safety responsibilities could stretch.

'We've just got a couple of points that we'd like to see clarified, as to how the Bill will be enacted, especially some points around the PCBU, as it's now called, (the person in charge of the business undertaking), cause of course in farming we're quite unique in that it's not necessarily always clear, with contractors coming on and also sharemilkers and contract milkers - what liability falls where with those guys, you know, how you split that up."

Ms Milne said the fact that sharemilkers' houses were deemed part of the workplace, as well as worker accommodation, also made it difficult because their homes should be treated no differently.

"And also, we need to check what the liabilities are of people you don't know who are on your land, like fishermen and hunters and so on."

Ms Milne said Federated Farmers, like everyone else wanted to see death and injury rates come down, but also wanted a more flexible approach to enforcement.

She said obviously WorkSafe had to enforce the regulation.

"But we'd liken to see the same model as the MPI (Ministry for Primary Industries) runs, the VADE, which is voluntary advised, directed and enforced, so people have got a chance to learn what's required rather than just be straight into fines," said Ms Milne.

"And that way we can hopefully get a cultural change among farmers, to start thinking better about their health and safety and actually get a meaningful change, rather than just beat people with the blunt stick of regulation."

The Transport and Industrial Relations Select Committee will report back to Parliament in March next year, with its recommendations on the Health and Safety Reform Bill.