Point, park and anchor - the three essential steps farmers have been advised to take to protect expensive irrigation equipment from being knocked down and damaged during high winds. 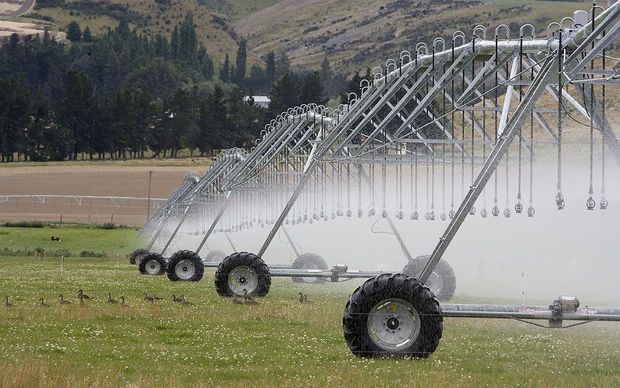 Hundreds of pivot or travelling irrigators were damaged in Canterbury storms in September 2013. Photo: PHOTO NZ

Rural insurer FMG has posted a new guide on this on its website.

The company and Lincoln University launched a joint study following the violent wind storms that hit Canterbury in September 2013, causing massive damage to plantations as well as hundreds of pivot or travelling irrigators on dairy and cropping farms.

It resulted in farmers and growers lodging more than 260 claims with the FMG at a cost of $7.6 million.

"Point, park and anchor - those are probably the three key themes arising from the irrigator advice guide. Point the irrigator to the wind ahead of wind events, having clearly delineated areas where you'd park the irrigator, and in those parking spots having some anchoring systems in place would be also part of the recipe," he said.

"In plain speak, three-quarters of the research participants who didn't make a claim for irrigator damage said they turn their machines to face down wind and then on the parking side when installing an irrigator think about where it will lie according to the wind."

Mr Wilkshire said those preventive measures are worthwhile when the high cost of repairing damage to irrigators and the disruption to farming operations were taken into account from last year's wind storm alone.

"We had over 260 of those claims, the cost of which came to about $7 million. And to put that in context, the Taranaki weather bomb - which had a huge impact on the region - all the buildings and costs up there came to $7 million.

"What we do know is that these irrigation systems are capital intensive and any farmer with them would know that already. These are very expensive pieces of kit and any practical steps we can take has a huge cost benefit to the industry as a whole."

Mr Wilkshire said on a smaller scale, 140km/h winds gusted through Darfield-Rakaia area last week. FMG is now dealing with more than 40 fresh claims for damage to irrigators which could amount to another $500,000 worth of damage.