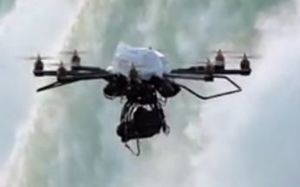 Professor Ian Yule said there had been some near misses between the remote controlled flying machines and planes on farms.

The Civil Aviation Authority (CAA) said the current laws were not up to scratch and it was beefing up the regulations.

The main changes were aimed at companies using the drones, and the CAA said if drones posed a risk to people, or became a hazard, the owner would need an operator's certificate.

Prof Yule said when drones were used on farms, the operators needed to take low flying fertiliser planes into consideration.

He said no accidents had occurred yet but, at times, it had been close.

"We have already come into conflict, well not conflict, but what we've had to do is take the drone down when there's been an aircraft in the area, and the problem is finding a way to get in touch with them [pilots]," he said.

Prof Yule said better communication methods were needed between pilots and farmers or researchers wanting to use drones in a rural environment.

He welcomed the stricter rules but hoped there was not an over-reaction which could hinder their use on farms.

"One thing we also need to work out is height that we can fly. At the moment they're talking about limiting the height to, I think, about 400 feet.

"I see that as a limitation, we have craft that we can fly higher than that, and that would actually help us do surveys much faster, cover bigger areas more quickly."

Prof Yule said the university would put forward its views on height restrictions and training within the consultation period, which ran until the end of January.