Police from Alexandra in Central Otago say they receive a call a week from farmers or forestry workers concerned about poachers. Four people have recently been prosecuted. 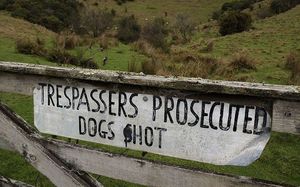 Council chair Don Hammond said the penalties are often weak, with people given trespass notices to stay off the land. He said farmers also need to be keeping watch.

"The far more simple things like neighbourhood watch. You know what is the registration number of that car going down the road where it has never been seen before.

"There is a role for land owners to look out for each other, to be in contact with each other in those sorts of events. There is a role to support the police force, remembering too that in remote areas the nearest police station may be a single police officer."

"If the options involve the setting up of rural watch and having a closer contact with the police who have also decided, or are directed to give it a higher priority, that would be great.

"Then, of course, you've got the issue that the police need to have very, very clear laws that they can enforce. And so if it requires a good hard look at the laws in respect to trespass and whether they need to be modified, then I guess that's where people with more competence in the law than I've got would make a contribution."