An Otago University study has thrown more light on the role that the varroa honey bee mite plays in spreading diseases through beehives. 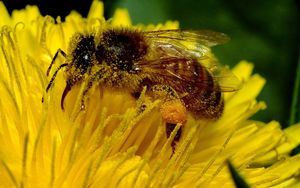 A PhD student, Fanny Mondet from the University's Zoology Department and Avignon University in France, investigated the effect of the varroa parasite as it spread south after its arrival in New Zealand more than 10 years ago.

Otago University zoology professor Alison Mercer said the study had confirmed the link between varroa and the spread of some bee viruses, including the deformed wing virus which has been associated with colony collapses.

"Deformed wing virus was found very seldom in New Zealand before the arival of varroa, but now is very prevalent," she said.

"Whereas Kashmir bee virus, which is another virus that was here before varroa arrived and it causes bee paralysis, the levels of the Kashmir bee virus increase significantly when the varroa mite first arrives and then it almost disappears when the deformed wing virus becomes established and takes over."