France dominated the first half and just about held on in the second to edge Argentina 23-21 in a thrilling Rugby World Cup Pool C clash at Tokyo Stadium. 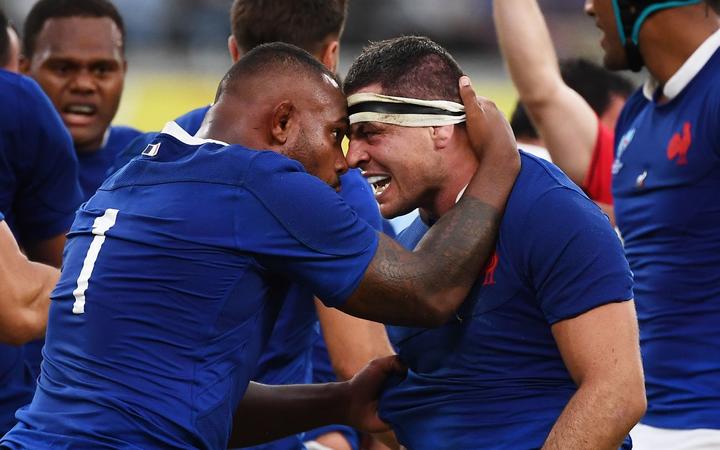 A drop goal from replacement flyhalf Camille Lopez 10 minutes from time gave the three-times finallists a victory which looked like they were going to romp to when they took a 20-3 lead into halftime.

Two tries in four minutes from centre Gael Fickou and Antoine Dupont had put the French well on top but the Pumas hit back with lock Guido Petti and hooker Julian Montoya going over from attacking lineouts.

Argentina fullback Emiliano Boffelli missed a 47-metre penalty in the final minute to leave the twice World Cup semi-finalists now probably needing to beat England to get into the knockout stages.

"I'm very proud of my boys. It was a tough game but we are very happy to start with a win," said France captain Guilhem Guirado.

"In the second half we never controlled the ball or the game but I am very proud of the first half because we were very clinical. When we play like that we are very dangerous."

The Pumas had just gone ahead through a 15th minute Nicolas Sanchez penalty when winger Damian Penaud tore off down the right flank from a flat pass and took the French into the Argentine 22 for the first time.

They almost made a mess of recycling the ball but a good pick-up finally got the ball along the line for Fickou to cut inside two defenders and touch down. 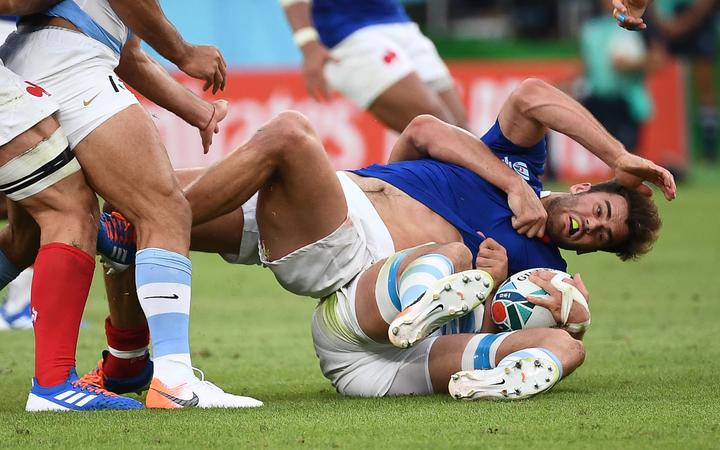 French wing Damian Penaud is tackled during the match against Argentina. Photo: AFP

Penaud was again in the thick of the action for the second try in the 22nd minute, wriggling past a couple of defenders close to the touchline and offloading for Dupont to dart over in the corner. Flyhalf Romain Ntamack converted both tries from wide out and added two booming penalties to send the three-times World Cup finalists into the break with a healthy lead.

Argentina had camped on the France line for a lengthy period at the end of the first half only for their scrum to fold, with French tighthead prop Rabah Slimani earning the congratulations of his team mates.

The Pumas forwards redeemed themselves three minutes into the second half, though, to cut the deficit to 20-10. A brilliant take of a high ball by Boffelli earned them a penalty which they kicked to touch before executing the catch-and-drive perfectly to send lock Petti over.

Nine minutes later they did it again, this time a rolling maul from the lineout remorselessly driving the French pack backwards with replacement hooker Montoya touching down to reduce the lead to five points.

France tried to reprise their running game but were let down by poor discipline and the Pumas charged back at them to earn a penalty in front of the posts which Benjamin Urdapilleta, on at flyhalf for the disappointing Sanchez, converted.

It was more ill-discipline from the French that allowed Urdapilleta to give his side the lead at 21-20 with his second penalty after 69 minutes but it did not last long.

Lopez, seconds after coming on as a replacement for Ntamack, sent a left-footed drop kick looping just over the crossbar for what turned out to be the winning score.

"It was not good enough. A really bad start from us as a team. Not good enough (to play) for only one half," said Argentina captain Pablo Matera.

"France didn't do too much but they took their opportunities and scored points. It's difficult to come back from behind."