Prince William, Catherine, the Duchess of Cambridge and their son Prince George are enjoying some private time at Government House after arriving in New Zealand for a nine-day tour. 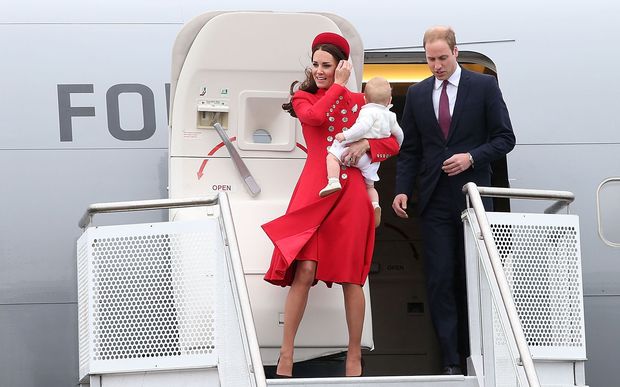 The Duke and Duchess of Cambridge touch down in Wellington with Prince George. Photo: GETTY

Their plane landed about 20 minutes late due to fog that had blanketed Wellington Airport on Monday morning. The party was met by Prime Minister John Key and wife Bronagh, Wellington mayor Celia Wade-Brown and the Governor-General's aide de camp. 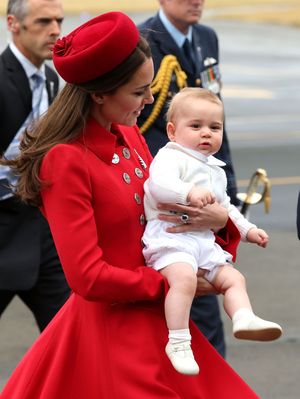 The Duchess of Cambridge and Prince George. Photo: GETTY

The route from the airport to the Governor-General's residence was lined in places by flag-waving raincoated schoolchildren who stood in the drizzle to welcome the royal couple and their nine-month-old son.

A formal welcome was held at Government House, lasting about 30 minutes. Prince George was not present, as he was taken indoors.

Maori elders greeted the Duke and Duchess on the lawn and a haka was performed by students from Rongotai College. Prince William inspected an official guard of Defence Force personnel before a 21-gun salute.

The family are now resting and have a private day scheduled for Tuesday. Their next public engagement will be on Wednesday at Government House when a Plunket nurse and parents' group pay a visit.

As the nation prepared to welcome the royal family, a poll was released showing 44 percent of those surveyed prefer a New Zealander as the next head of state.

Prime Minister John Key has predicted that the Queen and members of her family will remain New Zealand's head of state for years to come.

Mr Key acknowledged on Radio New Zealand's Morning Report programme he'd once predicted a move by New Zealand to a republic sooner rather than later. But he said on Monday that public polling in the past had revealed robust support in this country for the royals and he believed that sentiment has strengthened.

"If you go back about ... six or seven, eight years ago - maybe a decade - and asked the question whether New Zealanders want to become a republic then I think the numbers would have been sixty-forty opposed. If you asked that question today I think it would be eight-twenty opposed."

Mr Key said even in Australia, where republican sentiment is stronger, the public backs retaining a constitutional monarchy.

New Zealand Post says two commemorative stamps are on sale to mark the royal visit. One of the stamps depicts a family portrait and the other is the official portrait from Prince George's christening. A limited edition coin showing the Duke and Duchess at Government House in Wellington will be on sale from next week. New Zealand Post says the Queen personally approved the images for use. 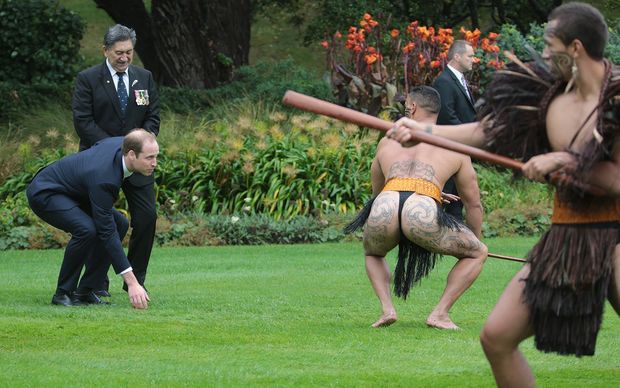 The Duke of Cambridge accepts the challenge during a powhiri at the official welcome. Photo: RNZ / Diego Opatowski 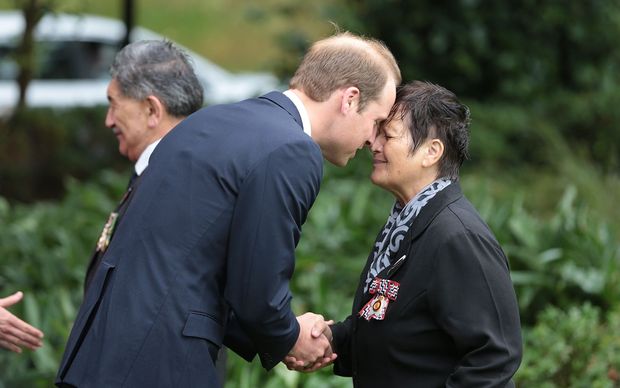 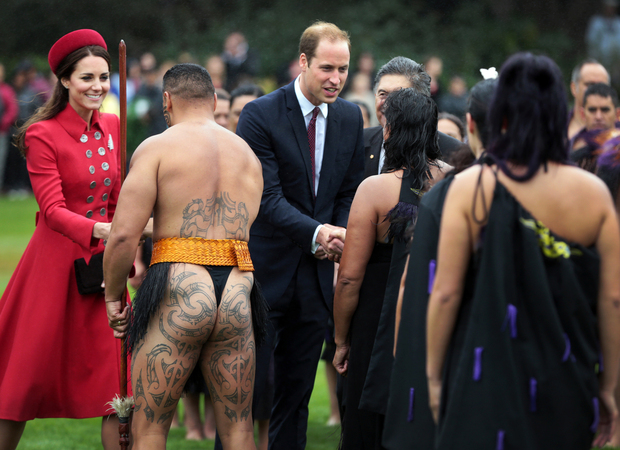