Police are looking for two men in connection with an armed robbery of a TAB in Christchurch on Sunday. 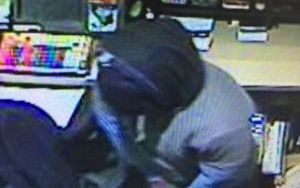 A CCTV image of one of the men who police said robbed the TAB on Sunday Photo: NZ Police

The pair walked into the Merivale building shortly before 7pm, leapt over the counter and demanded cash, fleeing with about $800, police said.

Both had their faces covered and one was brandishing a pistol.

Two staff members and a customer who were there at the time were unhurt.

Police described the pair as likely to be Māori or Polynesian, solidly built and aged in their 20s.

Detective Sergeant Chris Power said CCTV footage from the area was being reviewed.

"We are now trying to get some details to either include or eliminate a grey-coloured sedan, possibly a four-door, possibly a Honda."

Mr Power said a witness had seen the car driving at speed through the rear carpark.

The police were also investigating to see whether the robbery could be linked to another one at the same TAB in 2014.

Meanwhile, two other armed robbery incidents have also been reported this weekend.

Two men, one carrying a hammer, tried to rob a Rotorua liquor store on Saturday.

And in Christchurch, a man with a knife robbed a dairy.