A group opposing the sale of water rights in Ashburton say it will meet the council to discuss its concerns, and may take legal action to stop the sale.

Ashburton District Council is selling business estate land that comes with a consent to extract 45 litres of water a second from the town's aquifers.

Lobby group Bung the Bore held a public meeting last night and about 60 residents and three local councillors turned out to hear what the group had to say.

Bung the Bore spokeswoman Jen Branji said although she was disappointed at the turnout, it still confirmed the public backed the protest, and they would now look to meet with the council to discuss their concerns. 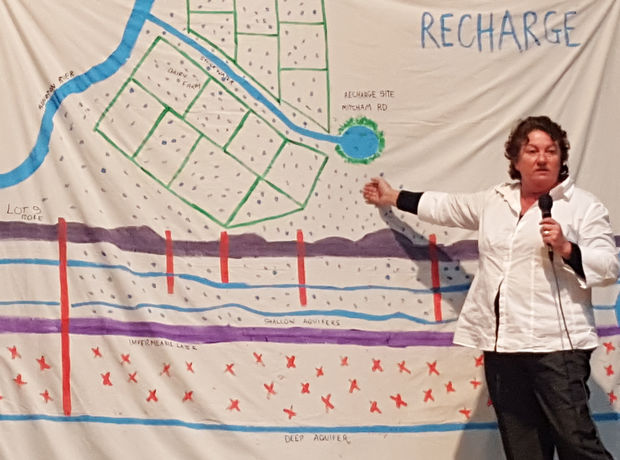 "The public asked some very intelligent questions and (it) just shows that people know what is going on here.

"We will do what they have asked us and we will meet with the council to see if they will abandon the consent.

"If they say no, which is highly likely, then we will go with option B which is take legal action."

Organic farmer Sheryl Stivens told the meeting she is concerned with how water was being managed in the district.

"The area is already over allocated so to think we would set up a water bottling plant in a red zone area makes no sense, the council must be drinking contaminated water if they think its a good idea." 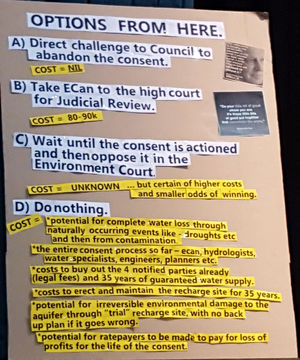 Some options outlined in at the meeting. Photo: RNZ/Sally Murphy

Ms Stivens said the area used to be wetlands, but they were all drained for dairy farming.

Local councillor Russell Ellis said he did not have a firm view on the land sale or water rights and came to the meeting to hear the community's concerns.

"I found the meeting really interesting but as you can understand I am stuck between a rock and a hard place," he said.

Mr Ellis said it was their right as taxpayers to challenge the council's decision to sell the water consents.

Ms Branji said she was concerned water diverted from the Ashburton River to recharge the aquifer could become contaminated.

"Why should we be under constant water restrictions over summer when a company can come in bottle our water and sell it for their own profit," Ms Branji said.

Ashburton District Council have said it will not disclose any information on the sale because of commercial sensitivity, but it said two offers have been made.

The council said the sale would be finalised by next month. 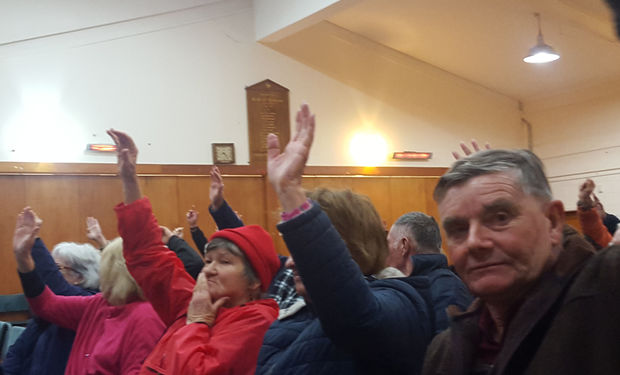 Some residents who attended the meeting. Photo: RNZ/Sally Murphy