Outdoor clothing store Kathmandu is having to defend itself after photos were published online appearing to show staff at one of its Auckland stores slashing items and throwing them out. 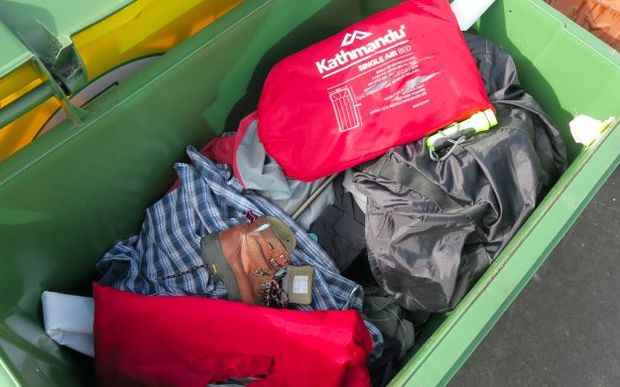 There are claims Kathmandu goods were deliberately destroyed and tossed in a skip. Photo: Supplied: Nicole Barratt / sixfootjournalism.wordpress.com

Many critics online say the goods, which were reported to have been rendered unusable, could have been given to people in need.

The images seem to show staff at the chain's Takapuna store slashing items, including a tent, and throwing them in the rubbish.

An air mattress, clothing, a backpack and tramping boots were also discarded.

"On the face of it does seem not right that we could just throw it out as opposed to if it could be used by someone else.

"But if I could just speak to a couple of examples yesterday, the tents that were called out as an example were no longer waterproof so I'm not sure how good that is to anybody.

"The sleeping bags were very, very old and stained, and had been used extensively by customers prior to that."

Mr Casey said the chain aimed to have zero waste by 2018, and the practice would have to be phased out to reach that goal.

Kathmandu's 2015 Sustainability Report described the company as "an industry leader in sustainability", with diverting waste from landfill to more sustainable sources a priority.

On its Facebook page, Kathmandu said it was investigating the circumstances around the disposal.