A man was arrested and Parliament locked down after a suspicious vehicle drove on to the forecourt.

Gates were locked and people were prevented from leaving due to the vehicle, which parked up right outside Parliament. 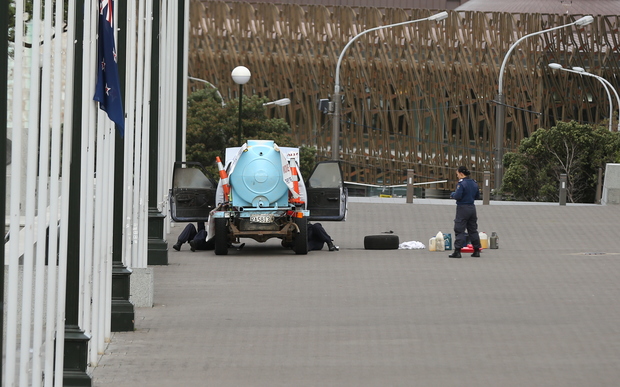 A single truck - which was smoking - drove onto the grounds shortly before midday.

A subsequent threat at the rear of Parliament buildings was also investigated.

Prime Minister John Key said it was distressing that a man was able to drive a ute onto the forecourt of Parliament causing a security lockdown.

He said the car could have been a bomb and that there would have to be a review of security.

"Parliamentary Security I think will have to go away and look at that because any day is a busy day down at Parliament, but Budget Day's a particularly busy day.

"We've seen other Parliaments around the world that they've been targetted when it comes to security issues - you saw that in the Canadian Parliament."

Police have cleared the vehicle which is cordoned off and the public are not being allowed near it.

The vehicle at the centre of the current security alert at Parliament pic.twitter.com/0M7ZnXs2Bf

People were told to keep away from the windows and were not allowed to leave the building.

The lock down and all restrictions at Parliament have now been lifted and police are letting the public back onto the grounds.

The incident happened as Bill English prepared to deliver the Budget this afternoon.

Police have confirmed that a man was arrested. MPs said people were seen running away from the ute as it pulled up onto Parliament's forecourt.

A witness said he saw the man try to light a flare in the ute, which had a tank on the back, and was adorned with a banner protesting about ANZ Bank not being investigated.

This has shown up on the forecourt of parliament and it looks like the person driving it was just arrested pic.twitter.com/VqVn9NQAec

The banner on the other side of the tank read "John Key! Move the gatekeepers. They're harbouring corruption. Blocking access to the ANZ Bank". 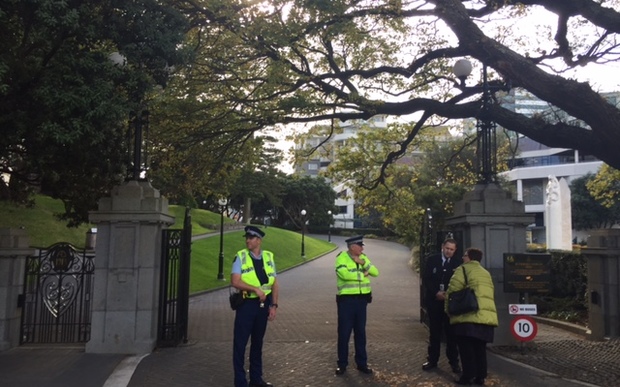 Police outside parliament - grounds still in lock down @rnz_news pic.twitter.com/GR9Pa89KOu

Shot of the car that's forced Parliament into lockdown. pic.twitter.com/MzfKj9N5bi