The Canterbury Plains could suffer more damage in an Alpine Fault quake than some areas closer to the fault, say researchers - and it is not alone.

Brendon Bradley, professor in earthquake engineering at the University of Canterbury, has created a computer simulation of the likely impact of a magnitude 8 earthquake on the Alpine Fault.

The Alpine Fault runs 400km up the South Island, along the western edge of the Southern Alps.

It has ruptured four times in the last 900 years, resulting in earthquakes of around magnitude 8, and is now considered highly probable to go again in the next 50 years.

Prof Bradley's computer simulation was created using data collected from the Canterbury earthquakes and information about land structures in the South Island.

He said it gave the most detailed information yet about the sort of impact a major Alpine Fault earthquake would have on different parts of the South Island.

Many Cantabrians and others in the central South Island, had assumed that because the Alpine Fault was more than 100km away shaking would not be strong, even in a large earthquake, he said.

"But our simulations indicate that this large energy that enters the sedimentary basin, the soft soils that the Canterbury Plains reside on, leads to a lot of trapping of what we call surface waves.

"These result in ground shaking in Canterbury which is a lot stronger, and lasts a lot longer, than other regions around the South Island where those features aren't present."

Canterbury is not alone in having this problem. Mr Bradley said many of the most populated spots in the south were on land which would be more prone to shaking.

"So when you look around the South Island places like Nelson and Marlborough, Timaru, Ashburton. A lot of our large centres are actually located in these conditions, where the ground shaking that you get is a lot stronger than you get in nearby mountainous regions." 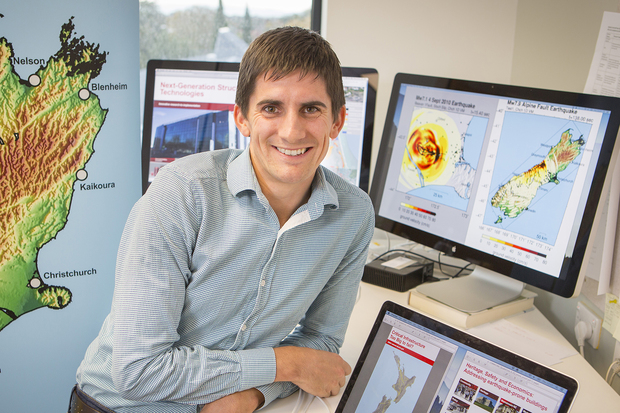 Professor Brendon Bradley said many of the most populated spots in the south were on land which would be more prone to shaking. Photo: Supplied

The simulation showed that a magnitude 8 quake could cause shaking across the whole South Island.

"So unlike the Canterbury earthquakes where the damage was very localised," said Mr Bradley, "we would expect damage across the wider South Island area, and that has important implications in terms of being able to access the areas, but also recovery, and the time in which people can expect to get some assistance externally."

Mr Bradley said it was expected that a major quake could take out all three alpine passes, and they could be out of action for up to six months.

'We are going to have to be prepared'

Don Geddes, emergency management officer with the Ashburton District Council, said there had always been an expectation that an Alpine Fault earthquake could be a major hazard for the area.

He said in his area the advice remained the same - to ensure they were prepared.

"Particularly with the Alpine Fault, because it is going to be such a widespread event, our residents in our district can't expect a lot of support, in the initial stages anyway, from outside of our district, because they are all going to be dealing with their own issues. So we are going to have to be prepared to look after ourselves."

"We are likely to see liquefaction in areas prone to liquefaction. With the rebuild we do have better buildings now, so I wouldn't say we won't see building failure, but it is less likely than in the past."

He said areas that were the most prone to liquefaction, mostly no longer had homes on them, and the infrastructure in the areas where there are houses had been rebuilt stronger, so was less likely to be affected in an earthquake.

Mr Bradley said his research is ongoing, and would soon be looking at more detailed analysis of the impact of North Island faults.