A navy commander has been found guilty of indecently assaulting a junior officer. 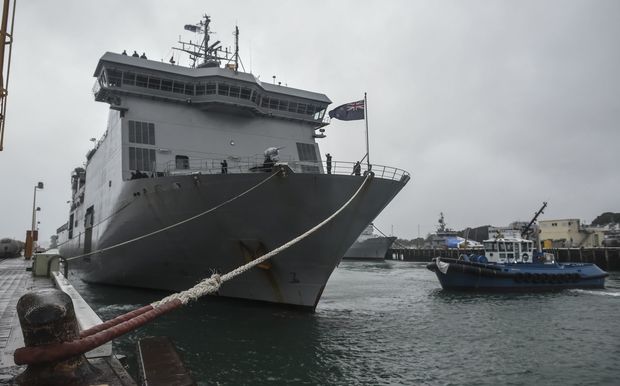 The HMNZ Canterbury at Devonport Naval Base in Auckland. Photo: NZ Defence Force

A navy officer said during a court martial that the commander grabbed her buttocks during drinks held after a dinner function at the Devonport Naval Base in Auckland in May 2012.

He denied the charge, with his lawyer saying the woman had not seen his hand actually touch her and it could have been someone else.

A previous court martial in March failed to reach a verdict.

Yesterday, the officer told the court martial she was grabbed four times over the course of several hours, including two occasions she described as "a full grope" between her buttocks.

She did not witness the commander's hand touching her, but it was clear who was doing it, she said.

The first time it happened, there was no one else except the commander behind her.

"I immediately turned to see who had done it and said, 'Hey'. In reply he looked back at me and laughed."

After the last grab, she turned around and swore at the commander, who he threw his hands in the air in a gesture of mock innocence, she said.

The prosecution told the court that 19 naval officers who had also attended the function were questioned by military, and none of them could recall seeing or hearing about any of the alleged incidents.

However two witnesses told the court they had seen the woman looking upset during the evening.

The commander's defence lawyer, Major Peter Brock, questioned the officer's memory of the evening, including differences between her initial statement and a later, more detailed statement she gave.

In his summing-up this afternoon, Judge Duncan Harvey said there were no witnesses to the alleged assault, and the panel of three Defence Force members tasked with delivering the verdict would have to rely on the circumstantial evidence.

That included the woman's evidence that the commander was the only one near her the first time she was grabbed, Judge Harvey said.

The commander will be sentenced at a hearing tomorrow morning, when name suppression may also be lifted.