Two earthquakes - the second a strong 5.2 magnitude - have struck near Masterton causing the lower North Island to "roll". 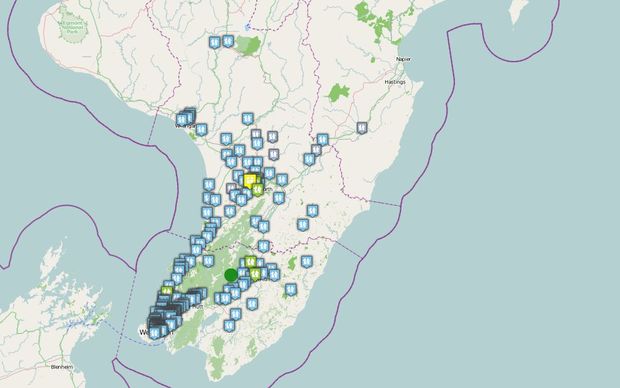 The latest was a 5.2 magnitude 15km west of Masterton, which struck at 7.55am. It was felt in Blenheim, Wellington and Lower Hutt, among other places.

The first quake, a magnitude 4.7 quake was centred 20km west of Masterton.

It struck at about 7.15am and was felt from Wellington to Whanganui, GeoNet said.

A Whanganui resident texted to RNZ that the quake was a slow, rolling motion.

Another, in Tauherenikau, said he thought a tree had fallen on the house: "The whole room seemed to shift a couple of feet and then spring back."

There had also been several earthquakes in the same area the hour before the 5.2 quake.

"The windows all rattled. A couple of items fell over inside the kitchen and the dogs came running through to say there's an earthquake going on. We knew that already," Mr Lilley said.

The #eqnz tag on Twitter was quickly swamped with local reports on this morning's shakes:

That was definitely the biggest earthquake I’ve felt in a very long time. Actually a bit shaken by it. Very noisy and rattly. #eqnz

What the hell was with the big jerking motion at the end? #eqnz

Woah that was a quick but violent shake #eqnz

Bloody hell - that one was bigger than normal! #eqnz

GeoNet seismologist Caroline Little said the agency had received more than 3000 reports of people feeling the quake, some as far south as Christchurch, but there were no reports of structural damage.

The shakes followed a 4.7 quake that shook Christchurch last night at 8.45pm.

#chch #eqc that rumble really rocked the house. It was a very long rumble. @NZWarriors @PenrithPanthers welcome to the city that shakes 4.7