Heavy glass sheets have fallen off balconies on a high rise in central Wellington and smashed onto the road. 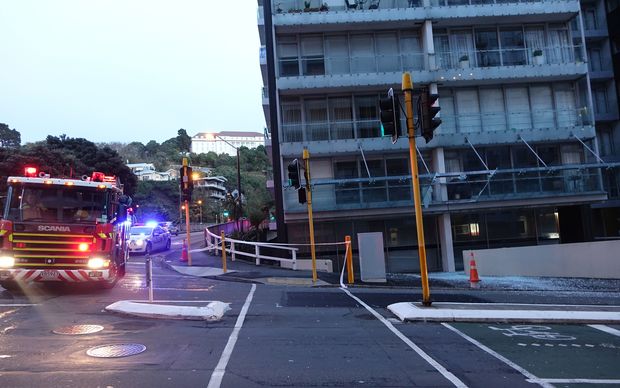 The remains of the large glass balcony after it fell off a high rise in central Wellington. Photo: RNZ / Kate Pereyra

A glass sheet from the 10th storey and another from an overhang on the ground floor fell off the multi-story apartment block on The Terrace before 7am.

Glass has scattered on the footpath and the road, near the entrance to State Highway 1, was down to one lane on one side and traffic coming off the motorway was diverted. The road reopened a short time ago.

Fire officers smashed out the remaining broken glass at the top of the building.

Thorndon senior fire station office Johnny Andrews said he knew of one other occasion when glass had dropped off the building.

"Glass has come off this building before," he said. "It's been different circumstances, its my understanding.

Firefighters smash remaining glass away from the roof top. pic.twitter.com/0ygrhdqoEt

It had not been particularly windy at the time emergency services were called, and the fall was before the two strong quakes near Masterton that were felt in the capital. 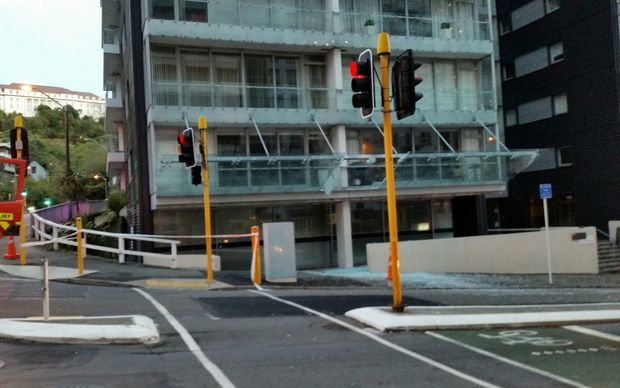 The remains of the large glass balcony after it fell off a high rise in central Wellington. Photo: RNZ / Kate Pereyra

One woman, Jeanine, told RNZ News she had moved into the apartment complex 18 months ago and hadn't had any concerns about her own glass balcony.

"I guess it could have happened to any other balcony, what was the cause? That would be my concern."

She said the building managers were good and would inform residents of the cause once it was known. 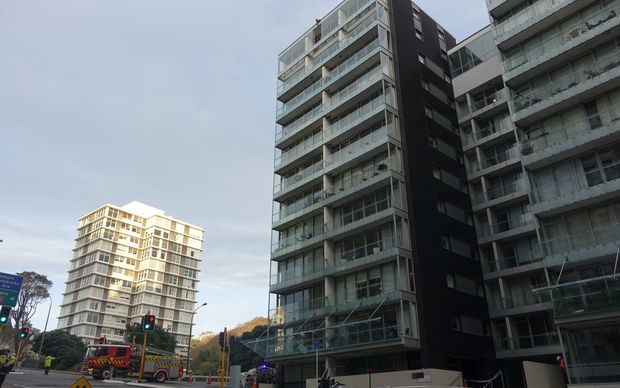 The glass fell 10 floors to the street below. Photo: RNZ / Kate Pereyra