A group calling for all Wellington City Council workers to earn the living wage says the money needed can be taken off top-earning staff.

Living Wage Wellington made a submission at the annual planning meeting today, calling on the council to commit to becoming an accredited Living Wage Employer.

Its spokesperson, Paul Barber, said the council needed to ensure that all staff, including contractors, were being paid the living wage rate of $19.80 per hour, instead of its current minimum of $18.55.

He said the increase would make a big difference to people on the minimum wage.

"We've already seen for the hundreds of workers who have had their wages lifted, what a difference it makes for them, perspective it gives - instead of just scraping by to survive that you actually have enough to really participate, you can have some time with your family."

Mr Barber said the money to provide the living wage could comfortably be taken out of the salary increases of the 22 council staff who are paid more than $180,000 per year. 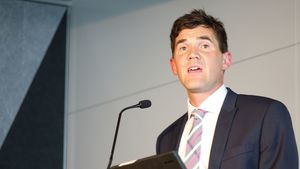 But deputy mayor and mayoral candidate Justin Lester said that was not the answer.

"I don't want to compensate at the lower end by cutting rates at the top end, I want to respect the jobs that everyone does.

"But at the same time I want to make sure that that gap isn't as large and I think that those at the lower end, we should respect the job that they do and they should be remunerated sufficiently."

Mr Lester said the council had included $250,000 in the draft Annual Plan to move its base rate closer to the living wage.