A Danish man has been convicted and fined $10,000 for killing a protected whio, or blue duck, while sighting his rifle on a hunting trip.

There are fewer than 3000 birds left in the country.

The man killed the whio hunting in a conservation area in the Perth Valley on the South Island's West Coast.

The Department of Conservation's (DoC) South Westland operations manager Jo MacPherson said the killing of the native duck was noticed by other trampers in the area. 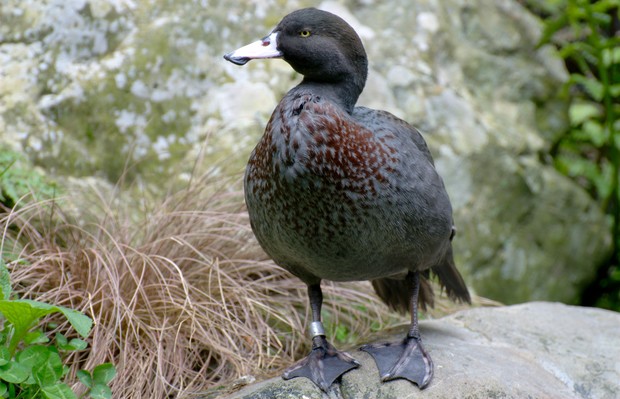 There are fewer than 3000 whios left in New Zealand. Photo: Wikicommons

Ms MacPherson said the incident happened while the man was sighting his rifle on a piece of cardboard on the edge of a river near Scone Hut.

"A whio came in, they're very territorial birds, a whio would have flown in to see what was going on."

She said the bird landed about 100m away from the man.

"So while he was sighting in his rifle he then turned and shot at the whio while it was on the water."

The hunter said he was unaware the whio was protected but Ms MacPherson said that was not good enough.

"He didn't do his research around what he can and can not shoot."

The man was also hunting in the area without a permit to do so.

"He came to New Zealand and he got a firearms licence, to shoot on public conservation land, you also need a hunting permit to legally shoot and it's fairly simple to get. It's five minutes on the computer online and you've got your permit."

Ms MacPherson said more work was needed to inform foreign hunters about the whio and hunters must always identify their target first.