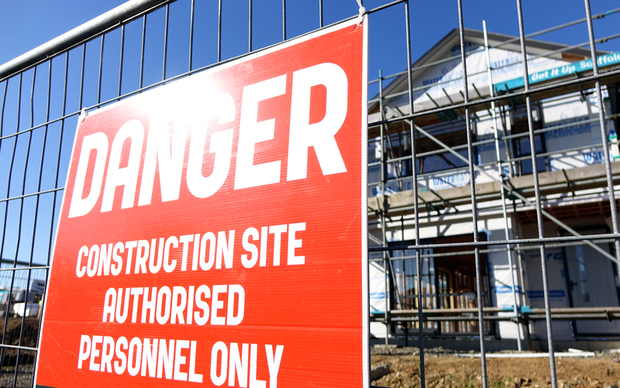 Despite a building boom creating thousands of jobs, the city's unemployment rate is above the national average at 6.6 percent.

Over the past year, about 17,500 more people got building work in New Zealand, and while those jobs were predominately in Auckland, the city is still facing a labour shortage.

Recruitment company Labour Exchange has had to spend more money on advertising and hire another recruiter in order to match demand for labourers and tradies.

Managing director David Devereux said his company was being stretched, with more and more work coming in.

"As far as I know, all the other hire companies are backs to the wall and flat tack, so we're no different. But we've got a bunch of loyal clients that use us all the time and they've all increased their workloads, so yeah, Auckland's just going off. I mean, look at the skyline, look at all the cranes - it's going nuts. And then there's all the stuff that don't have cranes.

"It's not having a huge impact - it's not putting buildings months and months behind - but I'm sure there's a few apartment buildings out there where people have paid money and they're meant to be in them already and they're probably not. I know of a few but it's just a sign of the times."

He said he had previously had some good labourers from Mexico and, given the population in that country of more than 100 million people, more should be allowed into New Zealand to fill the gaps.

Under the Mexico Working Holiday Scheme, 200 workers are allowed into the country for up to 12 months.

The government has relaxed immigration rules for the Canterbury rebuild to make it easier to bring in migrant workers and Mr Devereux said the government should do the same for Auckland.

'The industry has let itself down'

Steve Fowler, the chief executive of Auckland construction company Macrennie Commercial Construction, said the shortage was having an impact across the industry.

"There's a general shortage across the board and that's all skill sets really. And we're even seeing that with the quality of work, the lack of supervision and really just the extra time work is taking, because there's not the skill base there to deliver, and people are becoming over-committed."

"The industry has let itself down during the boom and bust period. We had quite a deep downturn through the GFC so there's been limited training. We've got to look to ourselves a little bit to make sure that we have good training avenues in place, and it all seems so easy to click your fingers and let a pile of people come in. We need to provide pathways within our own country.

"We've got quite a number of people coming out of schools with trades abilities and they want to get into trade, but the pathways aren't that good. "

He said while he knew of a number of contractors who frequently sourced labour from the Philippines, it was not the answer to the city's needs.

"Maybe it would resolve the immediate problem for the next eight months or two years, but we've still got to look at the bigger picture if we're going to have this level of activity. And we've still got pretty high unemployment levels and a lot of people coming out of school that need to be directed more into trades, more than, say, a higher tertiary education."

'It should be looked at right now'

Building Industry Federation chief executive Bruce Kohn said the industry was not at a crunch point yet, but some companies were already looking elsewhere.

"I think a number of companies are looking at how they can get workers from overseas who have particular skills that are not available in New Zealand at the moment. Some are related to new products coming to market, others are for traditional jobs."

He agreed an immigration policy change for Auckland should be considered.

"I think it should be looked at right now. And at the very least be kept under review."

However he hoped that with the industry projected to have consistent demand for the next ten years that more young people come forward.

Michael Barnett from Auckland's Chamber of Commerce said the current growth was not foreseen.

"I think you could sit back and look at the current growth that's in Auckland and some of the major projects that we need to undertake, and say the delayed action in completing some of this work means that it's all coming to a head quickly, and that's the reason for some of the shortages.

He said his organisation had already been attending job fairs in Australia and the United Kingdom to attract labour to New Zealand.

"We need to be realistic. We're not going to get the volume of talent and skills that Auckland needs for some of these major projects from the New Zealand market so we need to have an immigration policy that's going to be flexible enough and smart enough to let the right people in."

It said while it was a matter for the government and the industry to discuss, he was confident current policies were flexible enough to allow skilled workers in.

"It's just really a matter of confirming that immigration is the short term answer but long term the universities need to have a better understanding of the projects that are coming forward, the construction that might be taking place over the next five to ten years. And then they can use that as a part of building their own curriculums."