A maze of roadworks in parts of Christchurch is threatening the future of some businesses. 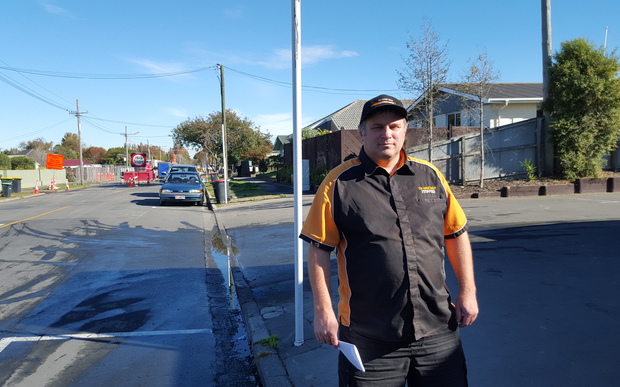 Darren Carlaw outside his business The Naked Baker in North Brighton, which has been hemmed in by roadworks for months. Photo: RNZ / Rachel Graham

Some suburbs are criss-crossed by numerous roadworks, with supposed detours around roadworks leading motorists through still more roadworks.

View a map of current roadworks and road closures in Christchurch

Part of the problem is the end-of-year deadline for infrastructure group SCIRT to complete all of the roadworks.

The roadworks started outside of Darren Carlaw's business, the Naked Baker, in the middle of last year.

He said the worst period was the 11 weeks when the road was completely shut off, and people had to walk to get to his shop.

He said his turnover has dropped about 30 percent.

"Which doesn't just impact on myself and my business partner," Mr Carlaw said, "but also on my staff because they are on reduced hours, and they have families to feed and rent and mortgage to pay. So there's a whole follow-on effect."

Mr Carlaw said the current work wouldn't be finished for several months and then different repairs would start up, which would see the road dug up once again.

He surveyed other local businesses about the impact of the works and said some feared they wouldn't survive.

The shops in nearby Parklands are usually about a three minute drive away, but at the moment almost all the main roads to the suburb are littered with roadworks, with some completely closed off.

The second-in-charge at the Robbies restaurant in Parklands, Corrina Andrew, said their turnover had dropped by up to 60 percent.

She said the roadworks were a constant subject for those customers who did make it in the door. 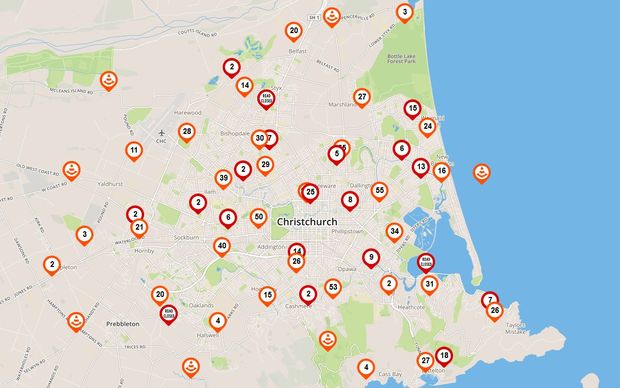 It's not just the CBD: A snapshot of roadworks and road closures on 27 April. Photo: Transport for Christchurch

His turnover has halved in recent months.

He has owned the business for two years, and said things had slowed down quite a lot compared to last year.

Mr Nguyen said there were roadworks last year as well, but the density was not as high as this year. He said recently the roadworks had just exploded, and he suspected the companies were in a rush to get them all finished.

Back at the Naked Baker, Darren Carlaw said he'd prefer fewer roadworks even if they took longer, though some of the other business feared this would just prolong the pain.

Mr Carlaw would also like financial assistance offered to those badly affected by roadworks, such as a rates holiday or a wages top-up.

Most of the roadworks are earthquake related. Pre-earthquake, about 150 applications for roadworks were lodged each month, but at the moment it's around 800.

The man in charge of co-ordinating all of those roadworks is Ryan Cooney, from Transport for Christchurch.

He said there was no simple way to balance all the demands.

"There are the needs of the project, and the rebuild of the city. There's the need of keeping those travelling around safe, be they the public or the guys on site. We also need to make sure the transport system keeps moving and importantly ... the needs of the businesses in the area."

Much of the work has been done by SCIRT, an alliance between local authorities and contractors.

Tim Mason, SCIRT's delivery manager, said the organisation would cease to exist at the end of this year, so they needed to get the work done now.

He said in Parklands there had been a huge amount of damage to repair.

"It's been quite a long programme of work, so a year and a half in a catchment like Parklands is a quite a considerable amount of time.

"I think even if we had the ability to extend, which we don't, it would potentially prolong some of the issues that we are seeing with the local businesses and the wider community."

All going well, the work in Parklands will be finished about November this year.