It's the season of salt in Marlborough.

The annual salt harvest at Marlborough's Lake Grassmere is about to wrap up, by which time about 60,000 tonnes of it will have been scraped off fields of glistening crystallised brine, refined and packaged. 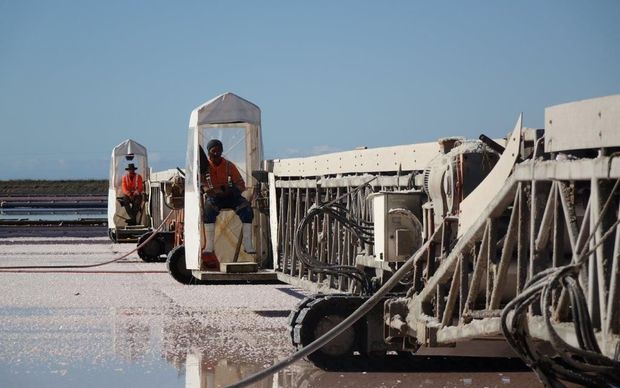 Site manager Euan McLeish said the process of making salt had not changed much since the solar fields were created in the 1940s, but robotics technology now existed within the refineries.

The plant, just past Seddon and about 40 kilometres south of Blenheim, is still being managed from a collection of Portacom sheds after the large earthquakes of 2013 wiped out many of its buildings.

It is owned by salt manufacturer Dominion Salt, which has its head office and refinery at Mount Maunganui.

The hot, dry salt plains at Grassmere, just over a ridge from the lush green vineyards of Yealands Estate, were a complete change of scenery for Mr McLeish, who had recently moved to the region from Auckland. 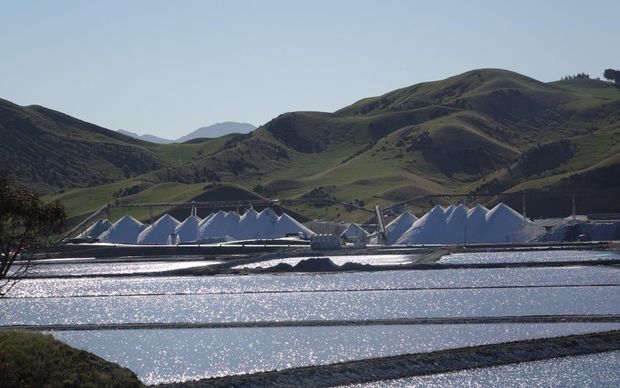 The marine engineer said he and his wife had Marlborough in mind when considering a lifestyle change, and when the job came up, they made the move for a number of reasons, including their love of the outdoors.

Mr McLeish said they had also ended up on the right side of the property market, and were pleased to have made the move before property prices increased in Marlborough.

Lake Grassmere, or Kapara Te Hau (meaning wind-blown lake) is a shallow lagoon close to the sea. Tectonic forces have shaped the landscape, and continue to do so. A 6.6-magnitude quake only 8km beneath the salt crust was one of several big quakes that struck Marlborough in the winter of 2013.

Storeman Mark Broadhurst said the hills rumbled first. He continued to get a daily reminder each time a train rumbled past on the main trunk line that ran straight through Lake Grassmere.

"I was just off site and it was horrible. I was driving, but the worst part afterwards was you could hear them coming - you'd hear them rumbling down the gully and everything would start shaking.

Mr McLeish said although neither the refineries nor the solar fields were affected, parts of the plant had been destroyed. 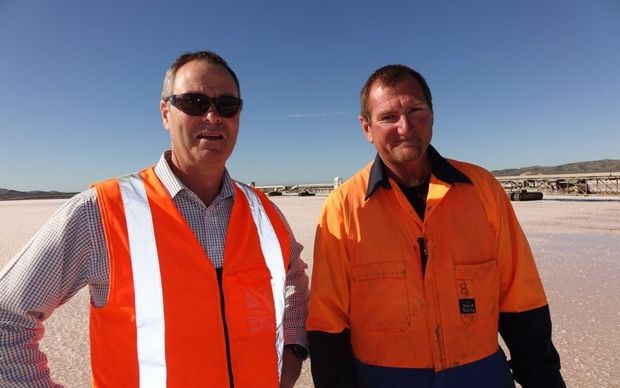 "The office and administration block, the laboratory and engineering stores - those buildings were totalled, but within days the business moved to portacabins and carried on," he said.

The saltworks were set up in 1943 by Australian-born businessman and Para Rubber Company founder George Skellerup.

He set up the saltworks at the government's request, and a monument to his efforts rests on top of a windy ridge overlooking Clifford Bay, beyond the lagoon.

Mr McLeish said the monument, cemented back together after it broke in the quake, was a good place for gaining perspective. The scenery from the site, overlooking an array of different coloured ponds, was stunning, he said. 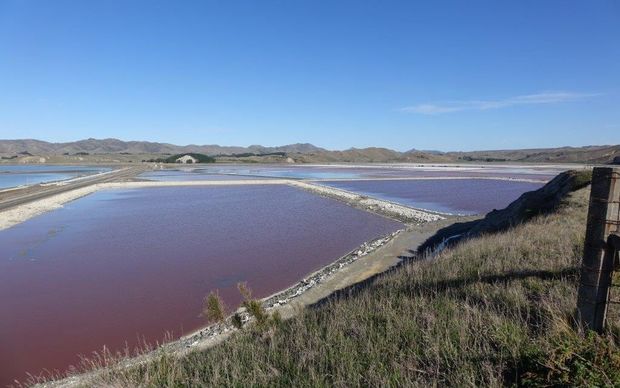 Salt is harvested over a few weeks after a process of storage and evaporation at Marlborough's Lake Grassmere. Photo: RNZ / Tracy Neal

The process of making salt begins with sea water pumped into the main 688-hectare lake throughout summer.

As evaporation increases the sea water's strength, it is pumped into a series of concentrating ponds, where further evaporation takes place.

When the brine reaches saturation point it is transferred to crystallisation ponds.

During the brief harvest period - about six weeks in autumn, the salt crust is lifted from the bottom of the crystallisation ponds, and taken to one of the two washing plants where it is washed in brine before being stacked in 20-metre high piles.

Mr McLeish said only a fraction of the harvest ended up as table salt. Much of it is used in the industrial sector, while the bulk is sent for processing at Dominion Salt's refinery in Mount Maunganui, where it becomes pharmaceutical grade salt, or fine salt used in food products.