A police chase in the Hutt Valley has gone wrong after the car being pursued hit and seriously injured a road worker. 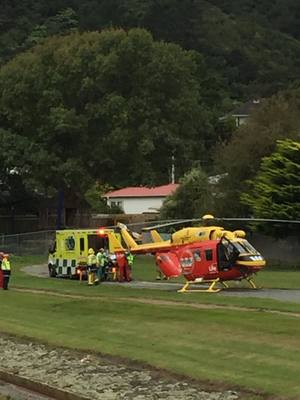 Officers said they initially noticed the driver of the red Mitsubishi acting suspiciously along Stokes Valley Road about 1pm, and made a U-turn to follow the vehicle before it sped off.

The car then lost control and struck a road worker, who was part of a team working on power lines, before its three occupants fled.

The worker has been flown to Wellington Hospital with serious injuries.

A police dog managed to track down one of the people in the car but the police could not confirm whether that person was the driver.

Police were still searching for the two other occupants, and had notified the Independent Police Conduct Authority.

A spokesman for the local lines company, Wellington Electricity, confirmed the incident had happened on one of their work sites in Stokes Valley, but could not confirm whether the man hit was one of their workers or contractors.

Jono Yardley Jones, a nurse who works night shifts, said he was asleep at his house, nearby, but was jolted awake by the sound of sirens, a screech and a big crash.

He rushed to the aid of the injured road worker, he said.

"I ran up to him and then within, like 10 minutes, I don't know, there were a lot of people there. He wasn't good. I rolled him back onto his back and he took a breath. He was alive."