A phrase symbolising a changing Christchurch has been painted on a central city wall by an international artist as a street art festival comes to an end. 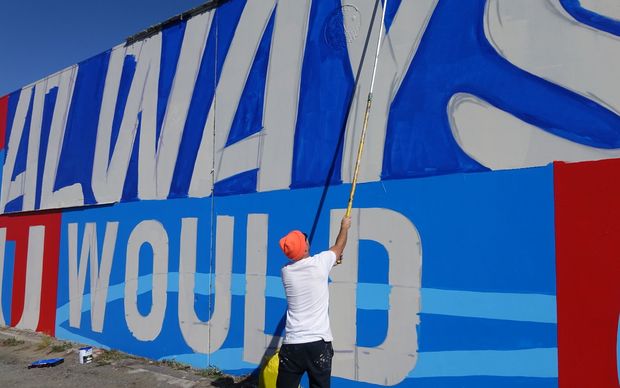 The "I always knew you would come back" phrase was devised through a competition won by University of Otago doctorate student Hannah Herchenbach.

She said she was extremely happy with how the artwork had come together.

"It's beautiful. It's huge, which is really cool. Also, it's opposite the bus exchange, like, you can't get a better spot than that so that's really cool."

The meaning of the phrase could change along with the city, she said.

"Right now it could be about people coming back, but as the city really grows up, it's kind of about the city itself," she said.

Ms Herchenbach said the idea came from a song she had written about an English friend moving back to the city after initially only helping with the rebuild.

"As soon as I heard about this competition, the line popped into my head instantly."

The competition was set up as part of the SPECTRUM Street Art Festival. It was intended to find a phrase which summed up how Christchurch residents felt about their city.

Sydney-based artist Elliot Routledge, known as Numskull, was brought into the project because of his specialisation in typography. 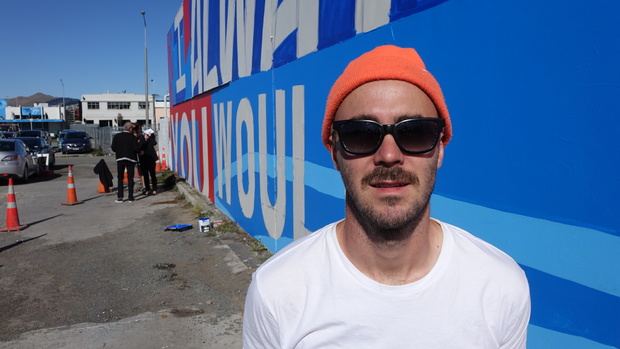 "People connect better with words, it's less abstract," he said.

He first became aware of the street art in Christchurch after it began appearing everywhere on social media following the February 2011 earthquake, he said.

"It's a wall-painter's dream when there are lots of big tall buildings ready to paint. Certainly helps brighten up the place in such dark times," he said.

The new mural was painted on a wall in the central city as a final piece of SPECTRUM Street Art Festival.

The festival had been showing at YMCA Christchurch since December last year.

"CERA [Canterbury Earthquake Recovery Authority] wanted the community involved, and after a few ideas were tossed around, we decided a competition was the best option."

"We wanted to engage everyone in the process and maximise the word getting out there. That resulted in 400 entries coming in which is an amazing response."

The festival had been showing at YMCA Christchurch since December last year. 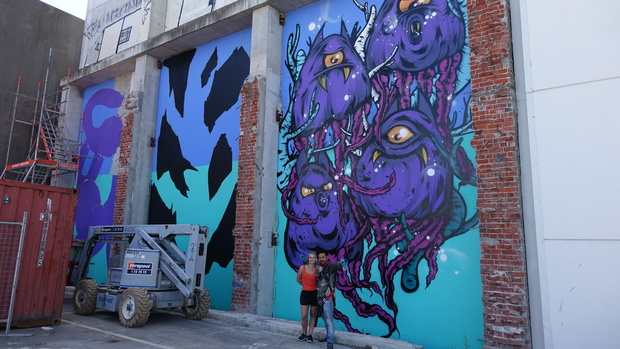 Bobby Hung (right) and assistant Danae Ripley with one of the other murals painted in central Christchurch. Photo: RNZ / Sally Murphy

Permanent murals were also painted on 12 city-centre walls, adding vibrancy to the rebuild.

It was the third street art showcase to be held at YMCA Christchurch in partnership with urban street art group Oi You!

Mr Shaw said a similar event was scheduled for the end of the year.