Auckland councillors have voted behind closed doors to start the process of fixing their office tower.

The 29 storey building is just 25-years-old, but its exterior is failing and there's a risk its large granite slabs of cladding will fall.

The council bought the building in 2012 for $104 million, hoping to save a similar amount over two decades. 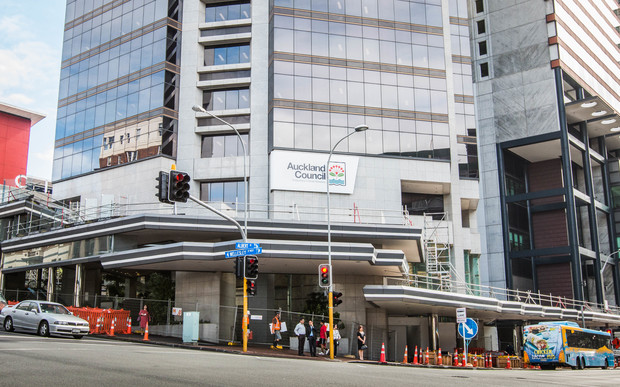 The council building has been beset with problems since it was purchased in 2012. Photo: RNZ / Tom Furley

He said a full review of the building was not done when it was purchased because it was deemed too costly, and the full-scale of the problem was still not clear.

Almost $5 million has already been brought forward to put in measures to catch any material before it hits the ground.

Part of today's meeting of councillors on the Finance and Performance Committee was kept confidential, to protect future tender processes.

Councillor Mike Lee said he was dismayed with the situation.

"The more I hear about this the more worried I am, and it's not just a huge financial blowout but it's the decision-making process during this acquisition seems to be deeply flawed."

The building, which used to be the ASB headquarters, is one of Auckland's tallest and most visible.

A lot of work will go into retaining current look and feel of building - stuff in red is what needs fixing pic.twitter.com/uBMSUbSdZd

In a briefing given to media before the meeting, reporters were told the "bones of the building" were good, with no structural problems.

But granite has to be removed and replaced, and investigations were being done to see if the high-rise was up to modern standards.

Earlier investigations in 2013 had already found degradation in the building was worse than anticipated.

The council said today some problems were found with cladding in a structural review before the purchase.

Auckland's separate councils amalgamate to form the super council. Council considers options to centralise staff and bring them together from their separate locations. Problems were found with the existing Auckland Civic Building

Auckland Council purchases ASB Tower at 135 Albert St for $104m hoping to save $100m over 20 years. A structural review finds problems with the building's cladding. A full-scale due diligence review of the building was deemed too expensive.

Staff shifted to the new building, internal features were changed. Degradation was found that was worse than originally expected.

Measures put in place to catch any cladding that falls before it hits the ground - $4.7m is allocated for this, which involves putting hanging scaffolding onto the building.