Christchurch City Council's decision to reduce the speed limit in the central city to 30km/hr will be a disaster for retailers trying to attract people back to the central business district, Christchurch developer says Stephen Collins. 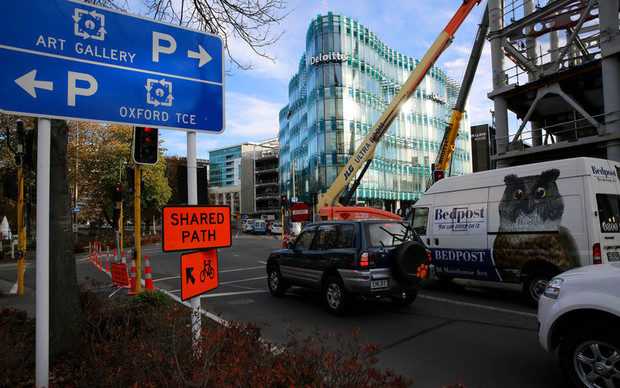 He is among a number of Christchurch business owners and developers who are concerned that the city is becoming inaccessible, with a reduced inner city speed limit, more cycle lanes and limited parking options.

But the council says people wanting to travel into the city just need to plan ahead.

The 30 km/hr speed limit was introduced on 12 March while the rebuild of a multi-story car park has been delayed until next year.

Mr Collins said the new speed limit was making it difficult for people to not only move in the city, but move through it.

"To retain it is going to cause a lot of problems for accessibility to the centre of the city. We're a rural supply town, most of the people who come into the city are coming by motor vehicle and the harder we make it getting here, the more we're going to be supporting shopping complexes outside the centre city.''

Mr Collins said he supported the 30km/h speed limit in the central city where there was a high pedestrian count around retail and hospitality, but said it was choking the rest of the city.

The Central City Business Association (CCBA) manager Lisa Goodman said businesses did not want people deterred from coming into the city due to lack of car parks.

"For some travelling by car may be the only option whether that's every day or infrequently, so it's important there is choice available on whether they want to bus, cycle or take a car into town.''

Ms Goodman has sought assurances from Christchurch City Council and the Canterbury Earthquake Recovery Authority that temporary car parks in the city would remain open until permanent car parks were built.

"It certainly doesn't help promote the central city as a great place to visit when people are put off by coming whether it's through a perceived lack of car parking or through roadworks.''

Owner of Cookn with Gas Bruce Griffiths believed the council could make it easier for people by providing designated areas where people could park and ride.

He said it was part of the council's strategy to discourage cars in the city by making it expensive to park in town.

"We need people in the city. All this mucking around, diatribe of talking about what's good for people who want to bring their cars in and park, that's kind of not the point.''

"In the four avenues there is always more parking than needed but we're aware that within that there are some hotspots like the health and retail precincts.''

He said council had received both positive and critical feedback about the reduced speed limit and the council was trying to create a central city that was useable for people in all forms of transport, and not just motorists in order for it to be a safe and useable place to be.