Pakiri Beach locals say they've been left in the dark by developers and iwi looking to develop part of the coastline north of Auckland. 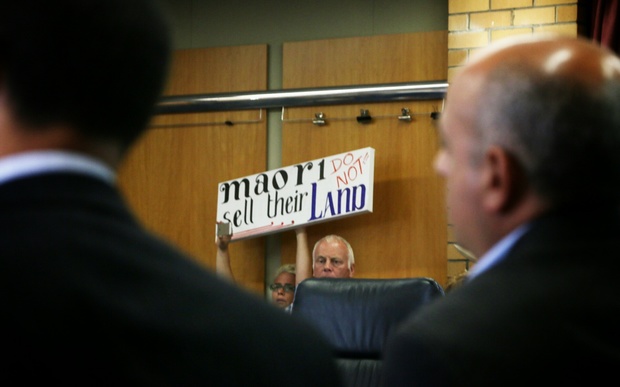 The joint venture of Ngati Manuhiri and developer John Darby Partners could build up to 60 luxury homes on hapu land in Te Arai south, which is currently pine forest.

The Ngati Manuhiri settlement trust bought the forest land back from the Crown in 2012 for more than $5 million.

John Darby partnered with neighbouring iwi Te Uri o Hau and American resort specialist Ric Kayne in the development of 46 luxury homes and an exclusive golf course, which opened last year on tribal land at the northern end of the beach.

The project is awaiting final sign-off as a precinct under the Auckland Unitary Plan.

Earlier this month at a local meeting, residents accused the developers, local iwi and the council of ambushing them with the new development plans.

A judicial hearing was held yesterday to hear submissions on the unitary plan.

Te Arai Beach Preservation Society spokeswoman Marie Alpe said their key concern was that the community wasn't aware of the scale of change for the forest, including residents on its boundary, and had therefore not submitted.

"We've sort of had a future for the forest mapped up which nobody knew about and that's what people are upset about.

"I mean, technically they had an opportunity to input, but they didn't realise that they should be."

She said while they accepted it came under a treaty settlement and provided a large reserve, she said the benefits did not necessarily override being shut out of the future of the forest.

Looking forward, she said she hoped the panel made recommendations to council.

"Things like making sure notification of resource consents is OK, there's ongoing community liaison, that sort of thing, would be better than nothing."

The chairman of nearby Omaha Marae, Roi McCabe, also put forward a submission, saying the protection of wahi tapu in the area should be paramount.

He said he had met with the developers and had a verbal agreement that they would be protected but asked for documentation.

Overall, he said his people had been working in the dark, unaware of the joint venture and the agreement between the settlement trust and developers.

A committee member of the marae, Janelle Penjueli, said the consultative process with iwi hadn't been clear.

"We feel as a people we haven't been consulted in this process. We knew nothing about it until the Te Arai Beach Preservation Society called a hui at Tomarata at the beginning of March.

"I feel that the land is perfect as it is. It doesn't need development especially of exclusive homes. this was the land of our tupuna, we have wahi tapu pa sites.

"Our ancestors bones are buried there. One of the original waka landed there on Te Arai beach, it's historically significant to Maori from all of the Kaipara including Ngati Manuhiri, Te Uri o Hau.

"We are not here to sell land. Have no right to sell the land as need to look after it."

The developers told the hearing panel they had reached an agreement with all the parties, including the Te Arai Beach Preservation Society, through mediation - with three conditions agreed, including the public meeting earlier this month and meeting and surveying the reserve.

John Darby Partners spokesman Jim Castiglione said the society had been part of several mediations ahead of both the north and south precincts.

"I think we're very fortunate in this case where we've had very constructive conversations with submitters on what has been a public process and a very fruitful process, where all issues have been put on the table and we've managed to successfully resolve those over what is an area of over 1500 hectares of land."

He said the details of the proposal would not have come as a surprise to the society at the community meeting.

"That was our first opportunity to go to the community proactively and share what we had resolved by agreement with the parties to the unitary plan process.

"It's surprising to us that there was surprise in the community given that, for instance, the Te Arai Beach Preservation Society submitted on what we had shared publicly through our submissions."

He told the panel the Te Arai south community hadn't had a liaison as there weren't many parties involved but said they wanted to see ongoing and continued communication.

"The overall intention is to create what will be one of the largest regional coastal parks in Australasia and, we understand, the world."