Two people are being treated for minor burns after a house fire in Porirua this afternoon. 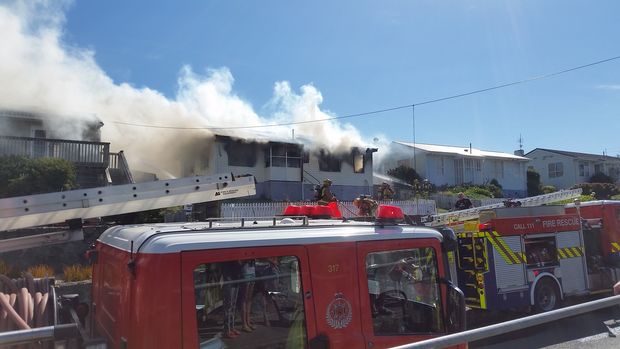 Four fire engines plus a command vehicle were needed to control the blaze on Te Pene Avenue in Titahi Bay.

A Fire Service spokesperson said it had received several calls about the fire just before 3pm.

Two people's hands had been burnt, the spokesperson said.

One resident on the street said he was out the back of his house cleaning paint equipment when he smelled the fire.

He said he looked up and saw a huge cloud of black smoke so he ran out on Te Pene Ave to the house where he saw flames coming out of it.

"There was windows exploding and all those sorts of sounds ... it's a bit scary."

A woman watching the fire with her children said she saw the smoke billowing out of the house from across the Porirua Estuary in Paremata.

She said she drove over and it looked like the bush outside the house was on fire, "and then it spread quite quickly into the house."

She said she saw a couple of men lying near the fire engines where water was coming out because she thought their hands were burnt.

An ambulance later turned up to the scene and was treating some men.

A large amount of smoke had engulfed the road and was billowing into neighbouring houses, an RNZ News reporter at the scene said.

A crowd of residents had also turned out to watch.