An Auckland woman has used Facebook to taunt police while breaching home detention. 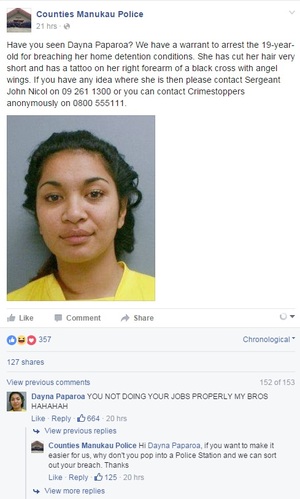 "We have a warrant to arrest the 19-year-old for breaching her home detention conditions," the post said.

"She has cut her hair very short and has a tattoo on her right forearm of a black cross with angel wings."

Thousands of people liked her post and hundreds have commented on the thread. Police responded, urging her to turn herself in.

Ms Paparoa also posted a photo of herself sitting on the bonnet of a police car to her own Facebook page.

"When we do put them on FB it's a genuine effort to stop bugging their family and friends who we're chasing them through and it's focussing on them doing the right thing and coming to see us," he told Checkpoint with John Campbell.

"We do get the odd idiot out there who thinks it's 'catch me if you can' and they start sending ridiculous comments and we don't buy into that.

"It's people like her who take up a lot of our time...New Zealand is a very small country, we catch people all the time - we just want her to man up and come and see us."

Mr Glossop had one final message for Ms Paparoa: "We're not going to give up."