Unions have this morning picketed Dunedin railway station over a worker they say was "subjected to a campaign of intimidation and persecution". 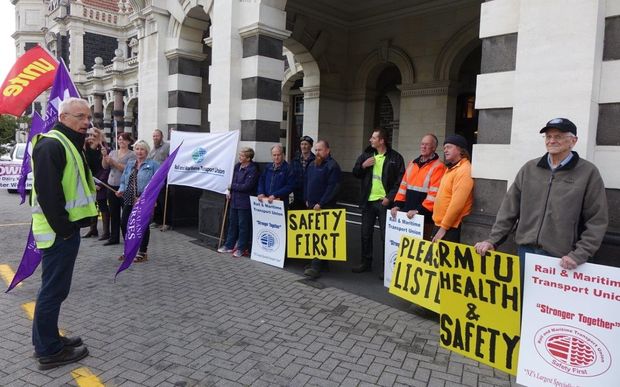 About 30 workers and staff from the Rail and Maritime Transport Union and a range of supporting unions waved banners and chanted health and safety slogans from 9am for about half an hour.

The rail union's South Island organiser, John Kerr, said one of its members was being persecuted by the management of excursion train company Dunedin Railways for raising a health and safety problem during operations in Taieri Gorge.

"Our member was concerned that the radio traffic around [the health and safety problem] had not been properly logged. She filed an incident report in order that that was recorded and since then she's been subject to a campaign of intimidation and persecution.

Mr Kerr said it was an attack on the fundamental right of a worker to raise health and safety problems, and she should not be punished for it.

"We're very, very concerned and we're doing our utmost to protect our member and to protect other members' rights to raise legitimate health and safety concerns.

Dunedin Railways chief executive Murray Bond said he was disappointed the union had branded the situation a health and safety issue when it was not.

He said the issue was actually about the worker's conduct and the matter was still under investigation.