The government has asked for an investigation into whether the balcony which collapsed in Dunedin on Friday, injuring 18 students, was up to building standards.

At least 16 people were watching the Friday night courtyard concert by the band Six60 were crammed on the first-floor balcony of a student accommodation block when it gave way.

Building and Housing Minister Nick Smith said structural building failures were rare but every incident like this needed to be thoroughly investigated.

He said it was possible the balcony did meet standards but that the large number of students on it was in excess of what the Building Code required.

The ministry will be working with the Dunedin City Council in its investigations and Mr Smith hopes to receive a preliminary report by the end of March.

Council says no notice given for concert

The Dunedin City Council (DCC) wants to know why a private concert was held without council staff, the police or Otago University being told in advance.

The council said its inspectors had been to the Castle Street courtyard and the building itself was structurally sound with no maintenance issues.

Its general manager of services and development Simon Pickford said the balcony was built to hold a maximum of six or seven people.

The venue wasn't suitable for the 1500 people who attended and the fact it was organised in haste contributed to the accident, he said.

"This is an event that was organised at the very last-minute, that neither the council nor the police nor the university was involved.

"That's something that I think did contribute to the accident. It was a concert at a venue that really wasn't suitable."

Worksafe said its investigators had also examined the building and it would decide early next week whether the accident fell within its scope. 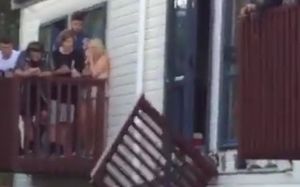 The collapsed balcony, shortly after the incident Photo: Snapchat

Dunedin councillor David Benson-Pope said students in the city did not deserve a bad rap, and that the balcony collapse was a random accident.

"No one should have any doubt that everyone is really serious about keeping our young people safe, and it is the silly behaviour around the fringes that we are having to try to cope with."

A couch was set on fire in Castle Street last week, which then set a house alight.

The university was working well with the council and other authorities and he had seen a marked improvement in student behaviour over the past few years, he said.

She said it was a complete accident and it was heartbreaking for students to see people they knew hurt, and they were in shock.

Ms Miller said Dunedin had been in the news a lot with students drinking and mis-behaving, but this was not one of those instances and was a complete accident.