Mr Palino launched his second bid for the mayoralty yesterday, and after a brief speech to supporters, engaged in a heated question and answer session with nearly a dozen media.

He angrily dismissed an allegation he helped publicise an extra-marital affair involving mayor Len Brown and Bevan Chuang - who was part of his 2013 campaign team - during the last election.

Mr Palino rejected Ms Chuang's claim that she had discussed the affair with him and how the information might be used prior to election day.

He said it was Mr Brown's team which had made him a target in the media, and Mr Goff had now hired the same people for his campaign. 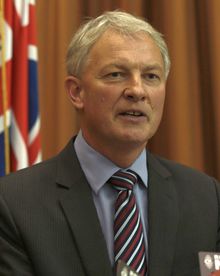 But Mr Goff said that was rich considering Mr Palino had chosen to hire advisors Carrick Graham and Simon Lusk, both mentioned by Nicky Hager in his book Dirty Politics.

"I would certainly encourage John to back away from that sort of politics."

Mr Goff said he had zero tolerance for dirty tactics.

"You won't be seeing that sort of politics coming out anywhere from the team of people that I've got working with me."

Mr Palino today told Morning Report he ran a clean campaign at the last election, and planned to do the same this time.

He said Aucklanders were more concerned about finding jobs and homes than in three-year-old controversies.

"They're not interested in something that happened three years ago that I had nothing to do with.

"And furthermore, you should be talking to Len Brown about it. It's about his affair - I'm not the one that was caught with my pants down in the Ngati Whatua room."

Staying in the race

Meanwhile, centre-right rival Mark Thomas has denied Mr Palino's suggestion he would drop out of the race if he had low support.

With Mr Thomas and businesswoman Victoria Crone in the race already, Phil Goff described the centre-right as "getting crowded".

Mr Palino said yesterday that did not worry him because not everyone would still be in the contest by the time campaigning began in July.

Mr Thomas said that was not going to happen.

He said Aucklanders were looking for a "serious candidate".

"I'm really the only candidate for mayor who's had five years as part of Auckland Council.

"To have serious things to say, you have to have been a part of this organisation."

He said Mr Palino's lack of political experience was the reason he lost to Mr Brown in the last election.