Residents in a small town in Taranaki are mourning the loss of a century-old building that was destroyed by fire this morning. 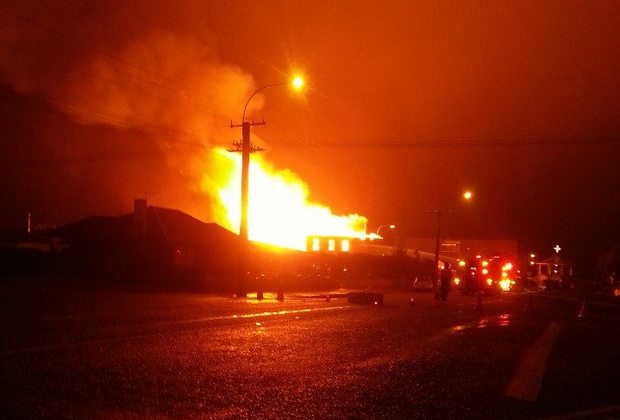 The fire broke out at the Waimate Hotel shortly after 4am. Photo: Facebook / Karen Harrison

The blaze at the Waimate Hotel, in Manaia, broke out about 4.15am and at its height, took 14 fire crews to stop the flames spreading to buildings nearby.

The two-storey building was 110-years-old, built in 1906 to replace the original hotel of the same name, which burnt down in 1881.

Residents said they were devastated to see the hotel now reduced to charred rubble, when just yesterday the bright blue painted building stood high on the town's main road.

Phillip Wong, who owns the Four Square just 20 metres from the hotel, said he had initially thought it was his shop that was ablaze.

"I live about one kilometre away [from the hotel] so when I looked outside and smelt the smoke, I thought 'I hope it's not our building burning down', thinking obviously of the worse case scenario," he said.

But Mr Wong said the realisation that it was the hotel was bittersweet, as the building meant a lot to residents like him.

"It was a very iconic building, everyone in Manaia has at some stage gone to it for functions or when there would be a local hangout...it was a very large two-storey building, you couldn't miss it, it was one of the features here," he said.

"Now it's another iconic building in Manaia that's levelled out. Manaia loses part of it's personality when the town starts losing buildings like that. It's a big loss to the community."

The fire service said it was too soon to know what caused the blaze, but a fire investigator is at the scene.

Two fire trucks and their crew will also remain at the site today dampening down hot spots and making sure the fire does not reignite.

Meanwhile, power has been restored to the 10 homes and businesses near the fire, which had to have their electricity cut off while fire fighters tackled the fire.

To share pictures or video of the fire, please email: iwitness@radionz.co.nz