The wife of a man stabbed in the back outside his South Auckland liquor store is grateful to the friends and neighbours who came to his aid. 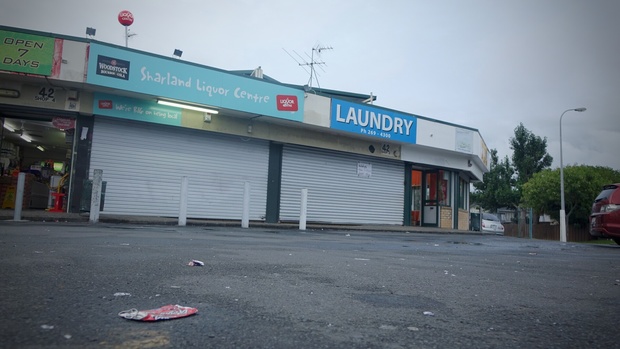 The owner of the Sharland Liquor Centre is recovering in hospital. Photo: RNZ / Kim Baker Wilson

Sarabjit Singh was hurt during a robbery at his store on Sharland Avenue in Manurewa late last night.

Neighbours ran across the road to help him and chase off his attackers, who threw bottles before fleeing in a car.

Mr Singh's wife, Maninder Preet Kaur, said it was not the first time someone had brought a knife into the store, and they had been robbed 10 times in just the past five years.

Police said the shop owner was chased by three people who had knives, and they eventually caught him and stabbed him in the back.

Mr Singh was taken to hospital where he is recovering from his injuries and is in a stable condition.

The attack caught the attention of residents nearby who came to help, and police said the attackers threw bottles at them before leaving in a vehicle.

A small amount of alcohol was taken from the store.

Police said while they did not encourage the public to become involved in such incidents, it appears the intervention may have diverted attention from the shop owner.

The co-owner of the neighbouring dairy, Sanjit Singh, said the liquor store owner had been at the shop for about five years.

He had been in contact with his neigbour since the stabbing.

"I've already spoken to him because he's still in hospital, he rang me a couple of times last night.

"So he's alright, that's the good thing but one of the wounds was a bit sore.

Mr Singh said an incident like this was highly unusual for the area, and it was comforting to know that shopkeepers had the support of neighbouring residents.

He said security cameras outside recorded the attack unfolding.

A woman who ran to the aid of the liquor store owner said all of her neighbours were heroes.

Nina was one of several neighbours who ran to his aid as he was being attacked.

He staggered into her arms in the carpark.

"So I caught him and sat him down and stayed with him the whole time.

"He was all right I was just helping him with his breathing and everything," Nina told RNZ News.

She said several neighbours ran to help him.

"I think anyone else would do that, I wasn't fussed by what I saw but I was more concerned about the safety and his health.

"I was talking to him the whole time trying to keep him awake, and [for him to] not fall asleep.

"We were all heroes," she said.

One man has been arrested and charged but the police are still searching for two others.