A 41-year-old man has been charged with assault after an incident in which something was thrown at Earthquake Recovery Minister Gerry Brownlee at the memorial service in Christchurch today. 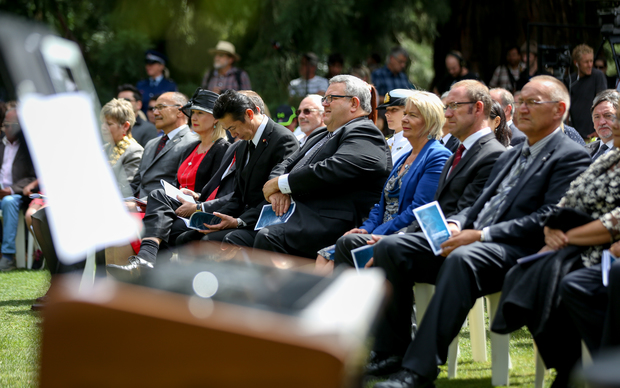 A video of the incident on Newshub shows Gerry Brownlee immediately after the incident standing and wiping a brown substance from the top of his head.

A large amount of the substance can be seen on the left hand side of his jacket and over his tie.

After being offered a handkerchief to help clean up the mess from another guest, Mr Brownlee hands the handkerchief back and quickly leaves, with Labour Party leader Andrew Little seen patting him, in what looked like a show of support, on the back as he left.

Earlier a spokesperson for Mr Brownlee said the incident happened while the minister was seated at the service.

The spokesperson did not want to say what it was that was thrown at the minister, but said it was not very pleasant.

He said the minister was fine following the incident and did not wish to comment any further.

Labour Party leader Andrew Little said it was "entirely inappropriate" for someone to use the Christchurch memorial service to protest against the Earthquake Recovery Minister.

Mr Little said he understood people were feeling angry, but that there were better ways to protest.

"I'm not sure there's ever a time and place to throw a sludgy mix over somebody's head," he said.

"But in terms of making a protest, given this was a commemorative event, we were talking about families who had lost loved ones and a city that was trashed, and to use that as a time to protest in the way that person did, I thought was entirely inappropriate."

The service commemorated the fifth anniversary of the destructive 6.3 magnitude earthquake.

More than 1000 people gathered at Christchurch's Botanic gardens for the public ceremony.

They heard from the Governor General, the leader of the Farmy Army, which organised volunteers to help people clean up following the quakes and Christchurch Mayor Lianne Dalziel.