The Fire Service believes two fires that broke out in scrub near Upper Hutt were deliberately lit. 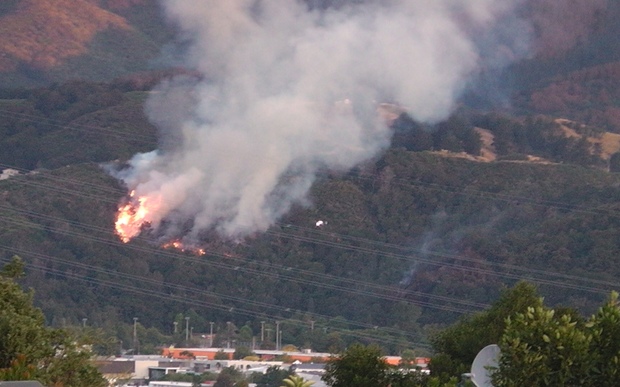 A second scrub fire started in Upper Hutt just as the first one was put out. Photo: Supplied

Fire crews have been keeping watch on the remains of one of the fires behind Maidstone Park in Upper Hutt, that caused the temporary evacuation of five households.

The first one started at just after 3.30pm yesterday but had just been put out when a second one started, threatening houses.

Up to 12 rural fire appliances helped fight the blazes.

The second fire was on about 1.5 hectares on a very steep face and ground crews and three helicopters worked to put it out.

Houses on Seymour Road were evacuated as a precaution and for piece of mind of the occupants.

One rural firefighter received minor burns while fighting the blaze, but went on to fight the second fire.

Mr Sloman said the fires were possibly lit by two different people and police were investigating.

He said ground crews would be in the area for the next two days to prevent the fire taking hold again.