The fire service is still working to stop flare ups after a scrub fire behind Maidstone Park in Upper Hutt caused the temporary evacuation of five households. 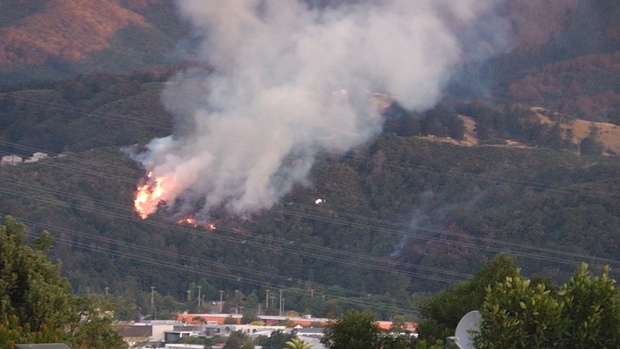 A second scrub fire started in Upper Hutt just as the first one was put out. Photo: Supplied

Deputy Principal Rural Fire Officer Rick Sloman said there were two fires in the area: the first one started at just after 3.30pm, but had just been put out when a second one started, threatening houses.

Mr Sloman said they believed the fires were possibly lit by two different people and the police were investigating.

He said while the fire was contained, ground crews would be there for the next two days to prevent the fire from taking hold again.

"We had a helicopter in and contained it about 5 to 5:30pm. It was about one hectare in size. At the same time the helicopter spotted a second fire on the hill and dropped some water on that until we could get ground crews there."

He said the second fire was on about 1.5 hectares on a very steep face and ground crews and three helicopters worked to put it out.

"We evacuated houses on Seymour Road as a precaution and for the piece of mind of the occupants. The NZ fire service and rural firefighters worked to prevent it going over the road.

"It's still burning [at 12am] - spots are flaring up so we've got ground crews working hard around the parameter to keep it contained. We stopped it from going across road and now it's gone across the face in different directions." 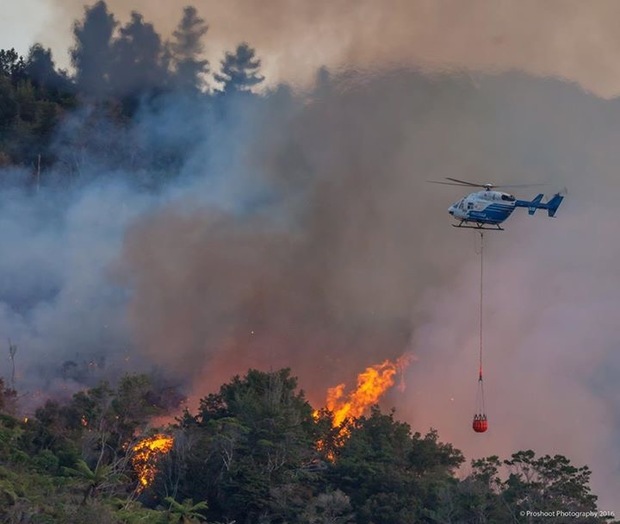 Rick Slowman said Monday would be a hot dry day so a priority would be to get stuck in before the heat rose.

There were 10 to 12 rural fire appliances and their crews still on the site.

One rural firefighter tackling the first blaze received minor burns, but went on to fight the second fire.

Mr Sloman said the fire service was concerned about conditions being ideal for further fires.

"The conditions are getting drier and we will elevate (the risk) from moderate to high - North Otaki to Wellington."

He said there was a high risk given the number of fires that had occurred in the area during the week, including the one at Happy Valley on Wellington's south coast.

"The fire behaviour is concerning. The fires are burning very hot and aggressively in relatively moderate conditions.

"We encourage people... to be alert - where urban meets rural - scrub and council reserves and parks. People must be vigilant. We want anyone seeing smoke in an area where they don't think it's being supervised to phone 111.

"The reality is that most rural fire crews are volunteers. They do this with community spirit. People who light fires put people at huge risk from having to deal with the fires in dangerous conditions.