Gruelling multisport event Coast to Coast is under way, with about 500 competitors biking, kayaking and running from the west to the east of the South Island. 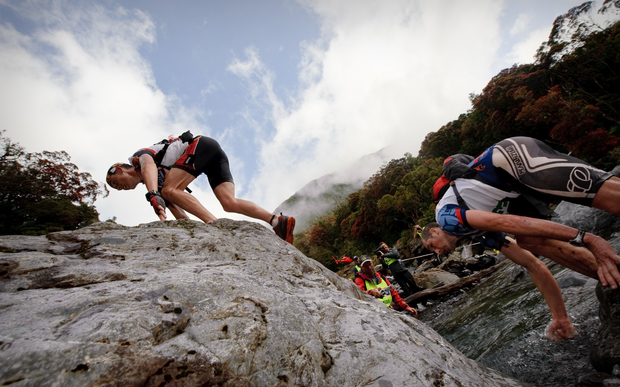 Competitors climb over large boulders on the way to Goat Pass during the first day of the Coast to Coast in 2010. Photo: Mark Tantrum / PHOTOSPORT

The event was founded in 1983 by Robin Judkins with just 25 people taking part in the 243km challenge over two days.

Now, the race is one of the most high-profile annual sporting events in the country and attracts competitors from around the world.

Held every February, the course starts on the West Coast, at Kumara Beach and traverses the width of the South Island, crossing the main divide and finishing on the East Coast. In 2016, the finish line will be at the pier on New Brighton Beach in Christchurch.

Officials have changed the cycle ride this year, moving the finish line from Sumner Beach to New Brighton's pier - with competitors approaching the city from the north.

Race director Richard Ussher said that would help alleviate the pressure on police and traffic management officials to marshall the route on a busy day in Christchurch, as well as having fewer traffic lights to hold up competitors as they completed the race.

Ussher said the Coast to Coast would provide a massive boost for the quake-damaged eastern suburb of New Brighton, with a festival being planned to welcome home competitors.

Live music, a large video screen and a wide range of food vendors will accompany extended operating hours for New Brighton's usual market, with live commentary and music provided by the event's MCs.

Ussher was hopeful the event would attract large numbers of spectators to watch finishers and soak up the atmosphere.

"We're really trying to create a festival for competitors to finish at, that will not only attract people supporting friends or family in the event, but will also draw people to New Brighton to just be part of the fantastic atmosphere.'

"We've been really encouraged by the support we've had in bringing the finish to New Brighton; it will be a huge boost for an area that was hit so badly in the earthquakes."

A fireworks display off the end of the pier tomorrow was also planned to bring the event to a close, he said.

This year, the oldest competitor in the race is 77-year-old John Livingstone - who is competing with his son Glenn, a Christchurch City Councillor.