The days of a laden freight train trundling onto a Cook Strait ferry are numbered. 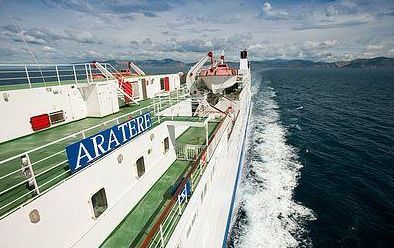 Kiwirail says its ship, the Aratere, may be the last such rail-compatible ferry it runs.

The sight of a train rolling onto a ferry has long been a dramatic sight for onlookers, as the train's heavy weight can cause the ship to move substantially in the water.

"We will now be moving more and more freight, as we have been doing, on a road-bridging basis," he said.

"It will be railed into Wellington, it will be put onto rubber wheeled bogies and put onto a ferry."

Mr Reidy noted the double handling would add to the cost, but it would be offset by a lighter overall weight on ferries which would save in fuel and time.

A decline in rail-compatible ferry technology has been blamed on international developments, such as the channel tunnel, which have reduced the demand for such equipment in Europe.

Other developments, such as the Baltic bridge linking Denmark and Sweden and a host of tunnels and bridges in Japan, also contributed to the decline in rail-compatible ferries.