The distinct aroma of milled macrocarpa drifts from a converted shipping container workshop, among a stack of other containers in a Richmond yard.

It is where Wal Dalley has created a slightly unusual woodworking business.

The retired department store manager and his wife moved from Dunedin to Nelson a few years back and developed a small business making, among other things, wooden coffins for pets.

It wasn't exactly a lifelong ambition, but serendipity played a hand.got in the way.

"I owned my own furniture store and I got quite ill so I retired from being in the furniture business. I got better so started to make farm gates.

"A friend of mine had just purchased Heaven Sent Pet Cremations and he had a casket that needed repair, so he said, 'could I repair it for him', so I said, yes, and then I said, 'I think I could make these'."

Mr Dalley now makes up to 700 each year - or about two and a quarter each day.

"Some timbers are much harder than others, but I make them in custom wood and paint them white, pine, macrocarpa and rimu."

While the coffins are designed to carry the ashes of the family cat, budgie or rabbit, Wal once made a coffin for a donkey, and an oak casket for his friend's dog Misty.

"A friend of mine used to bring his dog to Rotary, in the Savoy restaurant in Dunedin, and the dog would sit up at the table with everybody else. It was appreciated by all."

It cost several hundred dollars to buy a pet coffin, but Mr Dalley's cut from that was less than $100 per casket. He said it was more of a hobby than a money-spinner. 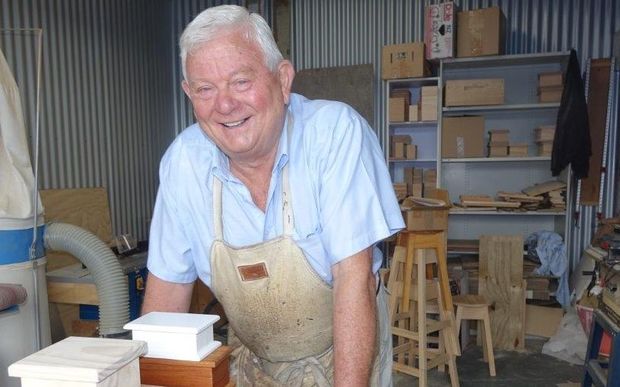 "I'm in the business of trying to enjoy what I do rather than make a million dollars."

He mainly supplied the cremator, who bought the caskets from him, after the vet had dealt with the pet.

Mr Dalley said several crematoriums around the country, including in Nelson, had furnaces dedicated to the disposal of animals.

Animals euthanised by a vet were then handed to the cremator who handled the task, and placed the ashes in a special cardboard box which was then placed in one of Mr Dalley's caskets.

He sold a portion of his works direct to the public via TradeMe.

Mr Dalley said burying pets properly was something more people should be doing, for the environment. He said disposal of animals was a bigger problem than most realised, including the thousands of dogs he knew were sent to city dumps each year.

"When you bury a dog there are toxins in the dog that stay in the soil, so you never bury your dog and put your potatoes in the next year...there are an awful lot of animals that are just disposed of."

"A lot of people get very attached to their pets and when they pass on it's a good way of the family - especially when there's children, to get over the passing of their pet, so if they can have some sort of closure to that."

His range of works extended beyond coffins to furniture and beehives, driven by his love of working with wood, and the need for occasional solitude.

"Well I'm not much good at doing anything in metal, and my wife doesn't like me re-organising the dishwasher, so I have to get out of the house from time to time."