A international surfing festival that brought the world's best women surfers to New Zealand has been canned as a result of the economic downturn in Taranaki. 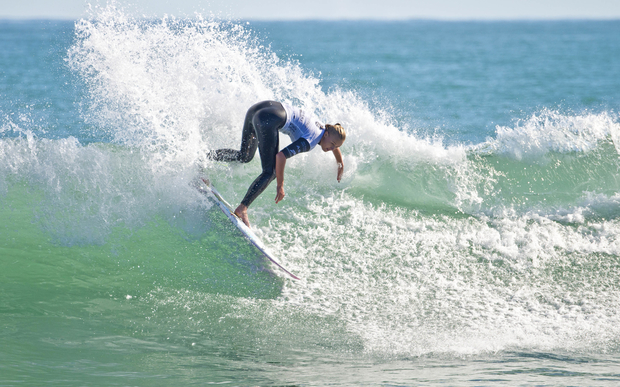 Professional surfer Ellie-Jean Coffey competes in the New Zealand Surf Festival in Taranaki on 1 May 2014. Photo: Will H-S / ASP

New Zealand Surf Festival director Craig Williamson said it had become too difficult to cover prize money and fees for overseas officials, both of which were paid in US dollars.

"We've had six very successful years, we've achieved a hell of a lot, but to be honest it was just a bridge too far too raise the sponsorship that was going to be needed."

The event began in 2010 as the New Zealand Women's Surf Festival, which was the first time a surfing world tour event had been staged in New Zealand.

In 2014, the festival was downgraded to a qualifying series event, after organisers struggled to raise the $US120,000 required for a world tour event.

The event had inspired hundreds of youngsters to take up surfing, Mr Williamson said.

"The reason we were doing it was to inspire young girls, and young surfers in general, boys as well, to show them that they could be world champions too - or at least to bring world champions to their backyard."

He said the festival had made it possible to establish a new surfing academy in Taranaki.