A rare northern royal albatross, or toroa, has been released back into the wild this morning off the coast of Wellington. 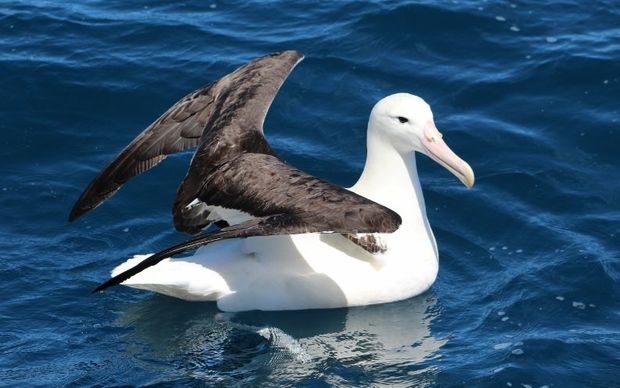 The bird had to have a badly injured eye removed and was set free today off the coast of Wellington after recovering at the zoo for the past fortnight.

The toroa is a huge white bird with black upperwings that only breeds in New Zealand.

Vetinarary nurse Sarah Van Herpt said the sick albatross was discovered earlier this month at Moa Point. It was weak, underweight and had a serious eye injury.

"Now its very feisty, eating a lot of salmon, enjoying time on our saltwater pool and ready to go," she said.

The albatross' eye globe was punctured, so it had to be removed to save the bird from further pain and give it a chance to survive.

But Ms Van Herpt said a one-eyed albatross could live successfully in the wild.

"There are reports of one-eyed albatross around, hunting, foraging, breeding, so we hope that this albatross is going to have the same success," she said. 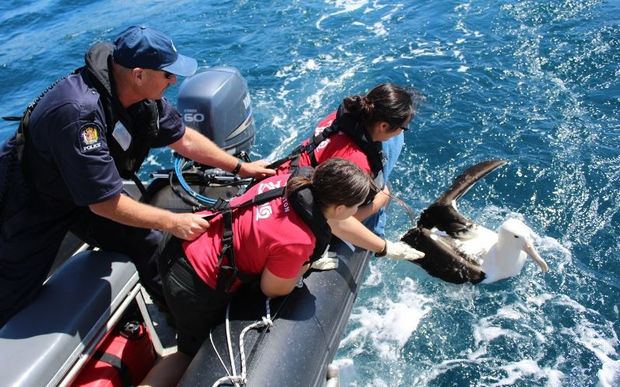 The albatross was ferried out of the harbour aboard the police vessel Lady Elizabeth 4.

The plan was to take it to a place where other albatross live, about five nautical miles off the coast.

Stu Main - a senior launch master on the Lady Elizabeth - is usually rescuing boaties in trouble and keeping a watchful eye on commercial and recreational fishing operations.

Today, along with zoo staff, he helped set the albatross free from the back of a IRB utility boat on the back of the Lady Elizabeth.

He was not phased by the extraordinary task.

"It's the first time we've done something like this but one thing in the police is you never know what you're going to get each day you arrive at work.

"There's always some situation or dealings that's different to the day before, it's a great work environment," he said.

The albatross was eventually released from the back of the Lady Elizabeth 4, aboard the IRB utility boat.

Anna-Karina Gonzalez Argandona - a vetinanary surgeon at Wellington Zoo - said she was unsure where the albatross might go, now that it was free.

"Hopefully it'll be going back to the area it came from. It's hard to assess because it has no banding for us to to pinpoint exactly what area it comes from.

"But they spend a lot of time at sea... sometimes they'll fly for days so it will just find its bearings and then decide if it wants to go back home," she said.

About 15 minutes after the albatross was released, it spread its huge wings and began walking on water, before taking off into the sky with the classic grace of a Concorde.