Heavy rain and thunderstorms hit parts of the country overnight, though the rainfall was not as severe as forecast, and brought relief to some drought-stricken areas. 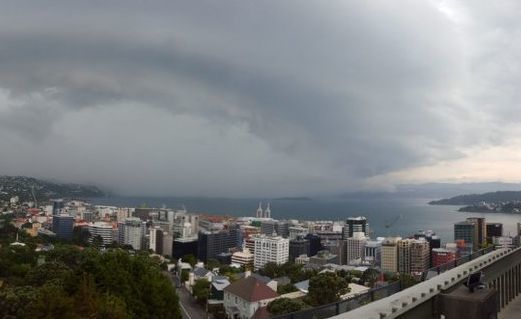 A storm moves in to Wellington yesterday. Photo: twitter

Rain and humid northerly weather is expected to move across northern and central parts of the country today, while thunderstorms have eased.

MetService recorded more than 60mm of rain for Nelson, and there were heavy falls in Taranaki and the Bay of Plenty overnight.

RNZ National's reporter in Nelson said the worst of the weather hit about 9pm yesterday when a large thunderstorm struck, but the severe rain the area was braced for never arrived.

The Maitai River, which runs through the central city, did rise, however, and the Wairoa River in Tasman was still running fairly high at 3.30am today. Downpours caused slips on the Whangamoa Saddle on State Highway 6 - the road from Nelson to Blenheim.

Parts of Otago and all of Marlborough and Canterbury have been in a state of drought since February last year, and Nelson apple grower at Waimea Plains, David Easton, said the latest rain could not have come at a better time.

He said the rain was enough for for the next month, and growers were extremely relieved.

The region was facing its worst water shortages in 20 years, and Tasman District Council imposed its toughest water cuts in decades, which were lifted last week.

Though a few days of rain have eased the situation in Canterbury, Federated Farmers' South Canterbury meat and fibre chair Miles Anderson said he was hopeful for more this and next week.

"Most farmers on the dry land of the east coast are pretty good at managing their way through situations like this and have done a pretty good job - it's just because it's gone into its second season it's made things very difficult for a lot of people."