Sixty people had to jump into the sea to escape the flames when a tour boat caught fire off Whakatane this afternoon. 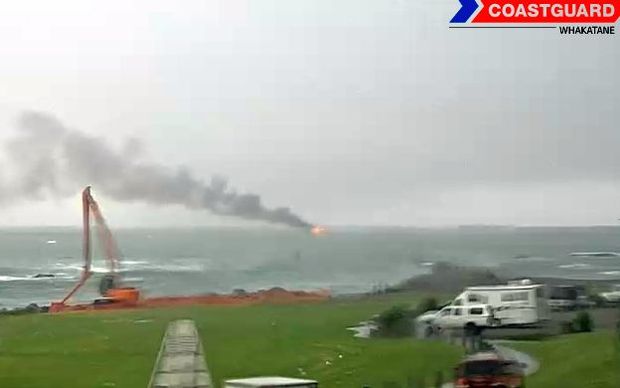 All of the 53 passengers and seven crew were brought safely to shore from the 22m vessel, owned by White Island Tours.

The PeeJay V was on its way back to Whakatane when it caught fire shortly before 4pm, and has since sunk.

Four people were taken to hospital, with one person suffering smoke inhalation and another a minor injury from jumping off the boat.

Whakatane mayor Tony Bonne said the people were shaken but the rescue operation went like clockwork.

He said most of the passengers were overseas tourists and many lost their passports during the evacuation.

All emergency services were waiting on the shore, with a triage centre set up on Whakatane Wharf - and a helicopter flew overhead to make sure no-one was left in the water.

The police thanked the local charter operators that joined the rescue efforts, saying they had "undoubtedly" helped to save lives.

White Island Tours managing director Peter Tait said crew were alerted to the fire because they felt "some heat".

"It all happened pretty quickly. It started in the engine room, but we don't know what actually started it," he said.

"We're extremely upset this has occurred, and are trying to come to terms with it."

Mr Tait said the sinking of the company's flagship boat was a huge loss, but he was grateful it did not end in tragedy.

"We have lost our boat, but the main thing is passenger safety and we can say that, other than a bit of smoke inhalation, everybody is okay," he said.

"We have been doing this now for 26 years. We are well prepared for anything that might go wrong in any operation. We deal with sea, we deal with the volcano and, over the 26 years, nothing like this has happened."

Mr Tait said passengers gave a couple of speeches following the rescue, and "they were overwhelmed by the help and professionalism of our staff".

Former rower Rob Hamill, who was on holiday in the area, told Checkpoint with John Campbell he could see an incredible amount of black smoke, with flames bursting through from the hull of the craft.

The boat had been anchored near the Whakatane Heads, he said.

"The boat may be sinking slightly but, really, it's just completely engulfed in black smoke with bursts of volcanic-like fire coming out the side of it and above it," he said.

"There's a real thick haze of fog and rain and probably 25-30 knots of wind blowing out there.

"The astonishing thing is, someone managed to put an anchor down, which is actually holding it in position."

The Transport Accident Investigation Commission said it had opened an investigation into the fire on the passenger vessel.

From tomorrow morning two investigators will interview those involved, gather information on the vessel and its operation and, if possible, examine its remains.

It said the inquiry's purpose was to identify the circumstances and causes of the accident, with a view to helping prevent similar accidents in the future.