A clothing label designed and produced entirely by migrant and refugee women in Auckland, has gone from selling to friends and family to getting bulk commercial orders. 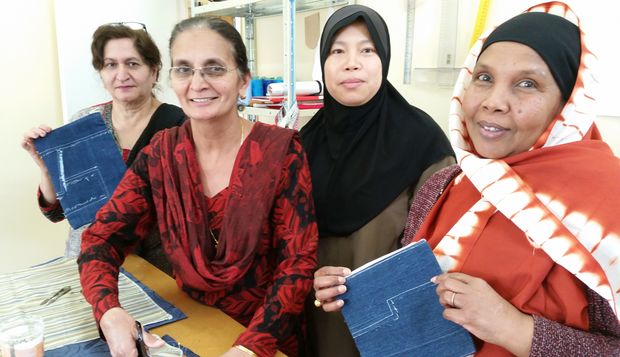 But it's had to put its next collections on hold while it produces orders for hundreds of items at a time, for other online retailers.

Cotton Seed is made up entirely of migrants, or refugees - like 21-year old Amina.

"I came to New Zealand when I was four, yeah I'm from Somalia and I'm a university student," said Amina.

She and her family escaped a long-running civil war in Somalia.

"We came over as refugees. We had family here so they sponsored us here.

"Just the thought of having a safe space to live you know, we were in the middle of civil war that's been going on for 25 years, I guess."

The computer sciences and maths student runs the online store and social media for Cotton Seed, and said it was important for newcomers to feel welcome and appreciated in a new environment.

"You never see designer brands just made up of migrant and refugee women you know.

"And coming to a new country, it's hard to find work, and creating your own work gives you a sense of power and makes you happy."

The Ethnic Women's Trust has been teaching women to sew since 2007 but two years ago created its own clothing label called Cotton Seed.

All money made went back into the label, paying for things including the women's wages, and renting the workshop space in Mount Roskill.

Rattika migrated from Thailand 16 years ago, and had never sewn before she arrived in New Zealand.

Now she works for three hours a day.

"Sometimes they too shy to go out to work, so we have the community here, so they can come and enjoy, and then they are happy."

The Trust's director is Fadumo Ahmed.

She said there was a new intake of 12 women into the sewing school each year.

They spent six months learning, and could then go on to get a job independently, or get paid work for Cotton Seed.

"These women, they are doing different activities. Some, they doing the hand-made material, and some of them, they making Muslim women clothing things," said Fadumo Ahmed.

"Some of them are making any clothing, like normal things, common you know."

She said as well as a skill, the women learnt about themselves.

"Because we come from India, from Pakistan, from Africa, from Somalia, Afghanistan you know, so we are so different people."

The clothing line now had more orders to supply online retailers before it began on its next summer and winter wardrobes.