A homeless shelter specifically for women will now be a permanent fixture in Christchurch.

The Christchurch City Mission had been operating a trial homeless shelter for woman for the last three years, but has now confirmed the shelter will continue permanently. 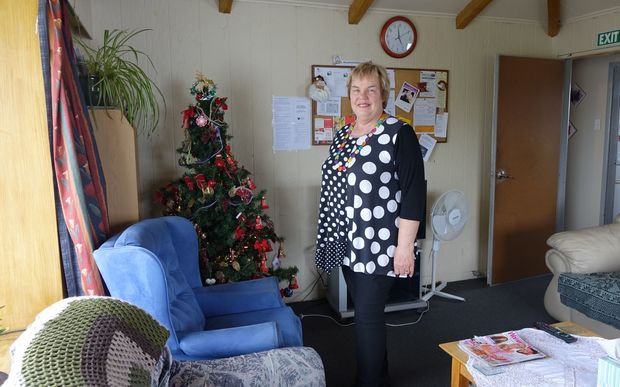 Catherine Williamson, director of the women's shelter, at the home in Christchurch. Photo: RNZ / Rachel Graham

The news has been welcomed by people who work with homeless people, who say the need is growing in Christchurch.

The shelter is part of a residential flat in central Christchurch.

There are three main bedrooms, with seven beds. The rooms are sparsely furnished, but clean and tidy.

Each day the women take their few possessions with them as they head out the door, as they are only able to stay at the house between 5pm and 8.30am.

Shelter director Catherine Williamson said the rooms have no doors to make living as communal as possible.

She said the women were in a room with people they didn't know, so it made them feel more comfortable if they could easily make contact with other people.

Also, the shelter staff check on the women through the night and didn't want to be waking people with creaking doors.

Ms Williamson said the service offered short term shelter for people who found themselves with nowhere else to go.

"When someone comes in they have up to a fortnight and in that time (they) connect with our social worker, make a plan about what the next step is. That will be around future housing.

"It may be around leaving town. They may have come to Christchurch thinking they'll make it but it hasn't worked out for them."

298 Youth Health Centre spokesperson Dr Sue Bagshaw said there had always been a problem with homelessness in Christchurch, but that had increased since the earthquakes.

She said a survey of the 1700 young people who visited her service between July and April last year, found that 42 percent had housing issues.

She said often young people initially said they did have housing, but further questioning revealed they were sleeping on couches, or in abandoned buildings.

Dr Bagshaw said that could have a major impact on people's health.

"Long term your diet goes down, you can't eat properly because you can't cook.

"You can't wash properly so you get skin infections. In winter you get chest infections.

"You tend to cheer yourself up with alcohol and other drugs. Not so good for a developing brain, never mind a developed brain. So there is all sorts of hidden consequences," said Dr Bagshaw. 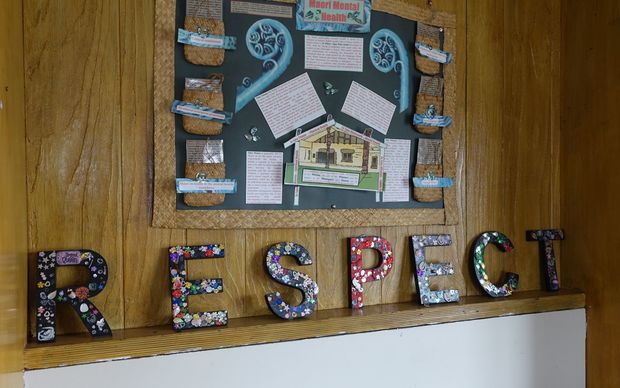 An art work created by women at the shelter. Photo: RNZ / Rachel Graham

Canterbury District Health Board psychiatrist Dr Christine Dudek said she was delighted to hear the service was now a permanent fixture.

The DHB directed women to the shelter if they were not psychiatrically ill, but in acute social crisis, such as women who have left a relationship and have no one else to stay with, she said.

"(The women) are in real distress. They don't know where to sleep, they need direct help and the women's shelter provides that.

"You can go there straight away, and they also have some social service and social workers to help with the situation."

Ms Williamson said she had worked in the sector for 30 years, and there had always been a need for a women's shelter, but the earthquakes and the destruction of cheaper accommodation, brought the issue to a head.

She said having the shelter as a permanent feature meant the Christchurch City Missioncould start making long term plans.

"We are in the process of looking at the possibility of a purpose built building. We've talked to architects and that may be a reality. So that would be great."

Ms Williamson said now that they knew they were no longer trying to convince people there was a need, they could put all their effort into growing the programme to empower women to move on.