Hundreds of Nelson children ended their 2015 school year by launching rockets, cooking popcorn, and gaining an appreciation of the intricacies of scampi. 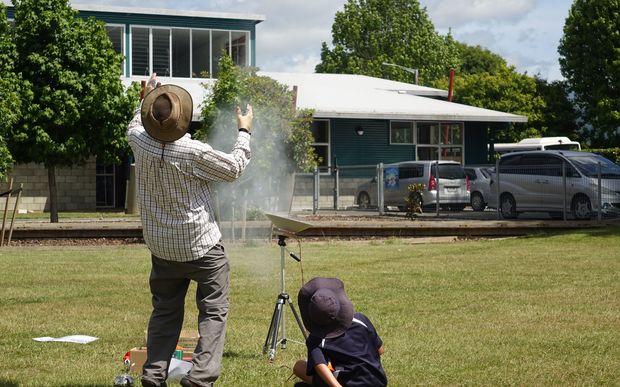 There is a science to launching a rocket. Timing is everything. Photo: RNZ / Tracy Neal

Events were held at a number schools, but at Parklands Primary School in Motueka the youngsters marvelled at drones, cooked solar popcorn and launched rockets, or at least tried to.

An initial attempt by one group was a fizzer, but on the second try the countdown did not go lower than "eight" before the button was pressed. The laughter could have been heard in the neighbouring district.

If launching rockets was fun, cooking pancakes and popcorn on a solar powered griddle certainly got the youngsters smacking their lips over science.

The week-long science festival offered students hands-on experience with activities presented by local scientists, teachers and members of the community, such as Peter and Joan Knowles.

The amateur astronomers from Richmond have been carting their home-made solar cooker made from satellite dishes around the region's schools for years, to show how energy from the sun can be used for cooking.

The couple were also star attractions when they went camping, with the satellite dishes they've been towing into Totaranui in the Abel Tasman National Park for the past 30 years. 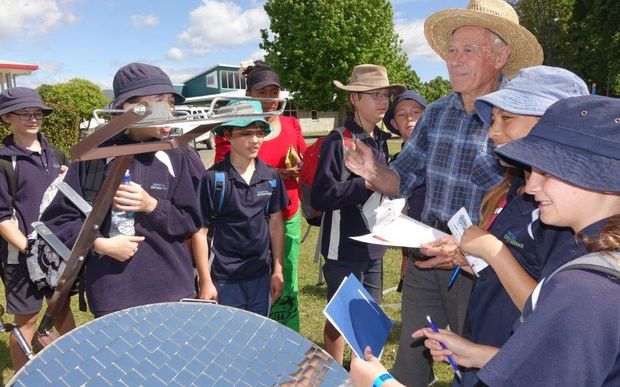 Peter Knowles explains how it's possible to cook popcorn and pancakes on a converted satellite dish. Photo: RNZ / Tracy Neal

The dishes were rigged to accommodate a cooking apparatus suspended over the highly reflective dishes, which direct sunlight to a focal point - in this case a cooking pot.

Mr Knowles said the energy generated was equal to the small element on a standard home oven, which was perfect for cooking popcorn and pancakes.

"We've had all sorts of comments like, 'what sort of signals are you getting from the aliens'?" Mr Knowles said.

He said he had not received one yet.

Student Jamie Patu said there was an easier way to cook popcorn: "Get a packet from the shop and put it in the microwave."

A taste of science

Its 200 scientists, laboratory technicians, researchers and specialist staff from throughout the world work for clients in New Zealand and overseas.

Cawthron Community Educator Cristina Armstrong said the aim of the science week in schools was to encourage student interest in things that existed around them daily.

"It gives kids a taste of all kinds of different science. Some have a clear idea of what they think is science, but actually science is just the way the world works. Everyone has a different interest and hopefully we'll inspire one or two of them to be future scientists," Ms Armstrong said. 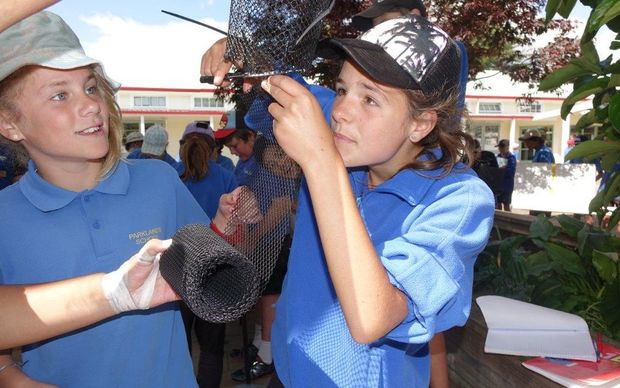 New Zealand marine studies educator Richard De Hamel was on hand to explain the intricacies of scampi, while students including Emma Langford had a go at making the special nets needed to catch them.

He explained that scampi lived deep in the ocean, and digging around with a trawl net wasn't great for the seabed, so a trap was needed.

All eyes turned skyward as a drone was launched, and began feeding back images to a computer screen in the school grounds from high above Motueka.

Konstanze Steiner is an expert in toxicology. She had her work cut out explaining her subject to a young audience, but found a way to make it engaging by chalking the outline of a dead dog on the concrete of the school playground.

The topic had a more serious note in that toxic algae found in rivers around Nelson and Tasman in recent years had been fatal to several dogs, and was considered harmful to people.

"I'm working in toxic algae, and I'm looking into why they produce toxins. We're looking into the ecology, so we want to figure out what causes the toxin production," Dr Steiner said.

She said hands-on teaching and explanation in the style encouraged by the science festival was easier than explaining toxic algae in a classroom.

"They can see why it's dangerous."