Angry Twizel residents have taken to social media to voice their disgust at the piles of rubbish left at a popular camping spot after the holiday period. 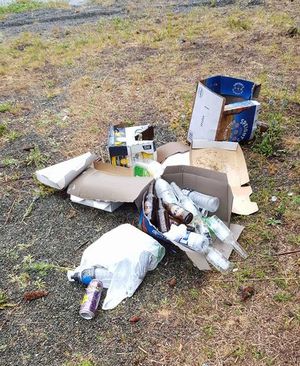 The Mackenzie District Council is urging people to record evidence of people dumping rubbish on their smart-phones so it can be followed up.

Mayor Claire Barlow said the district was large but had a small population so it was not feasible to have lots of rubbish bins around the lake.

"I suggest if people witness rubbish dumping they record it on their phones, and take down number-plates so it can be followed up by the council or the police," she said.

"Rubbish is another issue small towns in district are dealing with amid growing tourist numbers."

The council would discuss options to crack down on the ongoing problem, including more signage around waterways and lakes.

"We need to find a solution which will work. We don't want to put up too many signs because then people don't read them."

Local resident Wyn Reid came across the rubbish and aired her frustration on Facebook.

"I take my dogs to the forest near the lake daily and year round, there is always rubbish and evidence of people doing wheelies in their cars," she said.

"Lolly wrappers, juice cans, bottles, trailer loads of garden rubbish, and cigarette butts, I am horrified when i see fresh butts in the tinder dry forest."

"It's not ratepayers' job to pay to remove rubbish, be a good guest and take your rubbish away with you."