The Wizard of New Zealand has officially become a citizen, 41 years after moving to Christchurch. 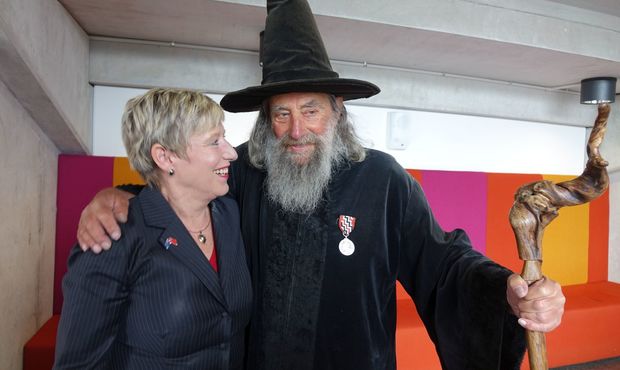 Known for starting a speakers' corner in Cathedral Square in the 1970s, and for his radical views, The Wizard has become a symbol of Christchurch.

He was even awarded a Queen's Service Medal in 2009 for services to the community.

Today, he joined 179 others gaining citizenship in Christchurch.

The Wizard said he did so because the timing felt right.

Also known as Jack, or Wiz, he said becoming a citizen meant he would be able to complete his social science studies at the University of Tasmania by correspondence.

He stood out in the crowd, dressed in his usual long black cloak and wizard hat, and there was a big cheer, and a few laughs, as his name was called.

'He means a lot to our city'

The Wizard rose to notoriety in the 1970s when he began preaching in Cathedral Square about religion and 'Americanisation'.

Encouraging others to speak out in public, he often sparked heated debates.

Since the earthquakes, The Wizard can be found in New Regent Street - with six other people he is training to follow in his footsteps.

Christchurch mayor Lianne Dalziel said giving The Wizard his citizenship was an honour.

"He means a lot to our city. He really has contributed so much over such a long time. He made Cathedral Square his own, and he offered a lot of humour."

After the ceremony, The Wizard said he was off home to celebrate with a nice glass of whisky.