A group of Auckland primary school children stranded in Wellington overnight were initially told they would have to wait until Tuesday to get home, after their return flight was cancelled because of an engineering problem. 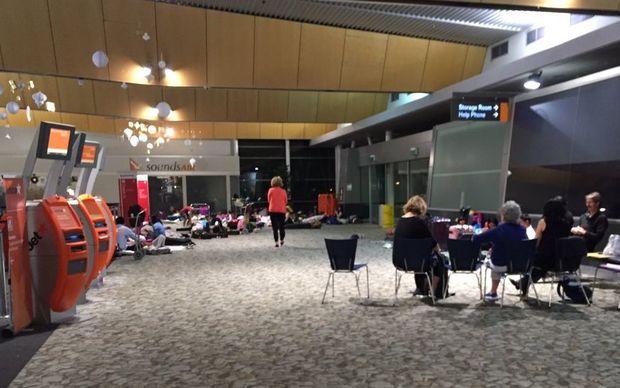 A group from an Auckland primary school prepare to spend the night at Wellington Airport. Photo: RNZ / Alexa Cook

The 70 children, teachers and parents from Cornwall Park District School spent the night in the check-in area at Wellington Airport, although they had to leave it early this morning because of early international flights.

Jetstar said accommodation in the capital was booked out because of the AC/DC rock concert.

The school's principal Janine Irvine said Jetstar's initial offer of flights on Tuesday was not helpful.

"We said that wasn't acceptable and we really asked them to push for accommodation or to get us on a bus back to Auckland."

Jetstar then said they would be put on a flight at 8.30am today.

The 50 students and 20 adults were given blankets and spent some of the evening in the check-in area, but were moved to a conference room at about 11.30 last night.

Ms Irvine said the children had coped very well under the circumstances.

"They have treated it as an adventure - it's happened and we just have to make the best of it.

"They are fantastic children, they coped very very well - even being woken up in the middle of the night, some of them, to be transferred upstairs."

Ms Irvine said she had had a call from Jetstar's chief executive, who was very apologetic.