Part of a high-rise office block on Auckland's North Shore is closed today after fire ripped through a corner of the fifth floor last night, blowing out the windows. 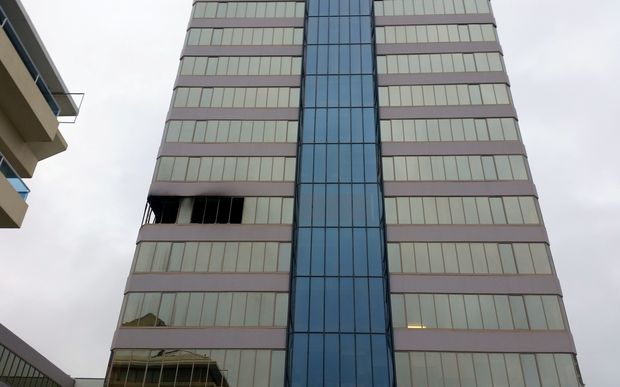 The fourth and fifth floor of the 12-storey building have been closed and the power shut off because water was coming through light fittings.

About 60 firefighters were sent to the BDO building in central Takapuna at about 9pm last night.

Waitemata Fire area commander Dennis O'Donoghue said when they arrived, flames were coming out of a window on the fifth floor. Other windows were shattered by the heat .

More than 20 firetrucks in central Takapuna. Large fire on level 5 of the BDO building appears to be out. @rnz_news pic.twitter.com/IHMQgaeKvm

He said while the fire was put out quickly and the damage mostly confined to that floor, the whole building has had smoke damage.

Mr O'Donoghue said a cleaner was in the building when the fire broke out, but no one was injured.

He said the fire got so hot that large sheets of glass were falling out onto the carpark.

"The temperatures were really hot by that stage, where its reached the glass and broken the glass with enough internal pressure that it's pushed it out. So the glass was coming out of the building, down into the car park."

"There is broken glass, a burnt out ceiling and desks and so on, but other parts look okay ,apart from smoke damage."

Mr Webster said fire investigators would be on site today.