Thousands of climate activists thoughout the country marched today in the lead up to the Paris climate talks. 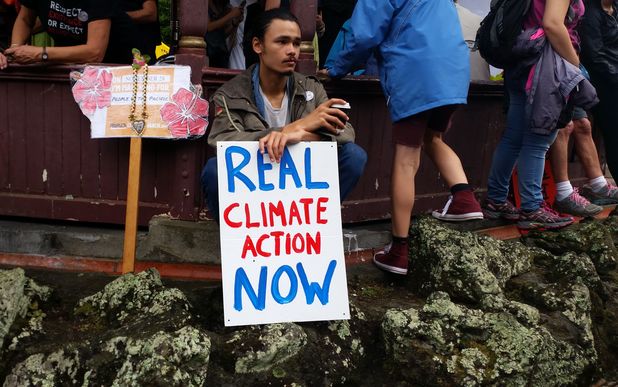 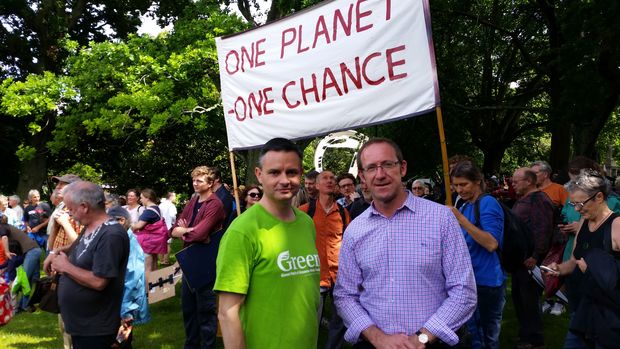 More than 20,000 people took part in more than 30 marches throughout the country calling on the government to take urgent action to combat global warming.

The biggest march appears to have been in Wellington, where organisers say 7000 people marched through the streets to Parliament this afternoon.

In Auckland, about 3000 people took to central city streets.

A Tuvaluan living in New Zealand, Fala Haulangi, said she was there because climate change threatened the very existence of her people.

They were already seeing its impact.

"That is definitely a problem to my people, they live, they experience it every day.

"That's why we're here. Because on our own we feel like, just because we're a small country, [and] we're poor, we look like we don't have a voice." 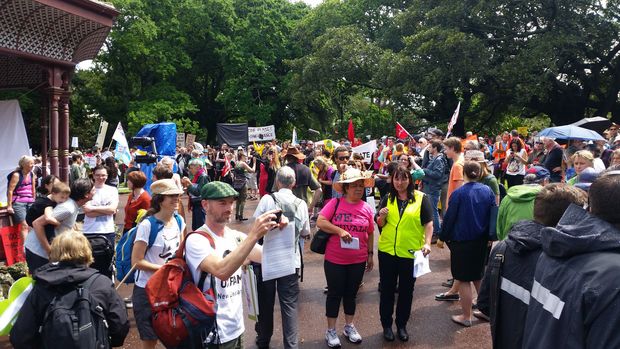 "Climate change will be a disaster for threatened species, like seabirds which nest on the coast, and sea level rise is going to destroy their nesting grounds.

"We've got to protect our wildlife, as well as our way of life, in New Zealand."

"Survey after survey shows that a vast majority of New Zealanders are very concerned about climate change.

"They actually do want the government to take stronger action than we've so far committed to. So today is really important to show the depth of the concern, and also how widespread it is." 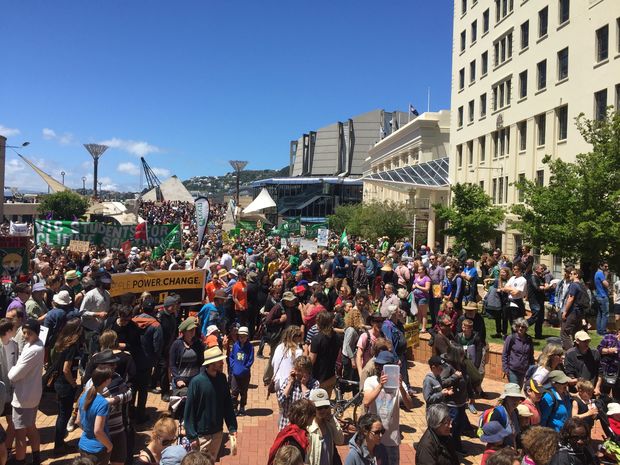 In Wellington, an estimated 7000 people gathered in Civic Square before marching to parliament, demanding the government take urgent action.

Toddlers, grandparents, students, unions, church groups and conservationists were among the chanting crowd, which was led through the streets by a brass band.

In a speech to those gathered at parliament, former president of the CTU Helen Kelly said dealing with climate change was not a choice.

"We must do it, we have to do it. And this is our last chance.

"It is our obligation to keep on fighting until we get a deal that saves the earth we live in."

The Anglican Bishop of Wellington Justin Duckworth called upon leaders to do more.

"I call upon the leaders of our nation and the world to actually lead.

"To not do superficial solutions but to do deep, profound solutions that actually make the difference In the end." 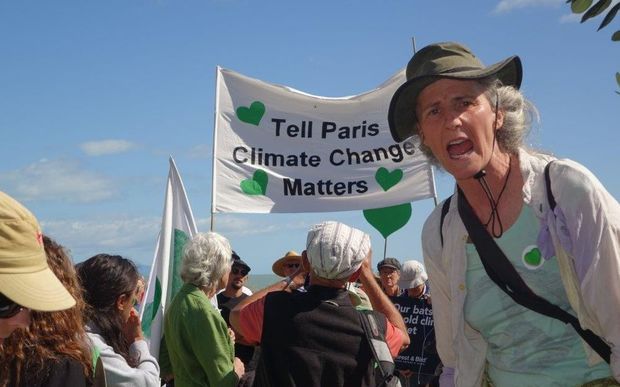 She decided to take part because she realised it was going to take a "ground-up" reaction to demand attention from the politicians.

"Personally I think it's going to impact even further on the economy and I am worried about jobs and people.

"Any of us that have land above sea level rise, I am worried about what we are going to do about homes and houses, where we are going to live. Are we going to have the right climate to grow food in, are we going to be able to continue exporting our own food overseas? It's every level really."

Nelson student Isabella McLintock, 14, said she was supporting the march because she believed the situation was bad.

"It's destroying animals' habitats and lifestyles. It worries me - it's sad."

Elaine, 18, said it was a "really cool chance" for the community to get together and be passionate about climate change.

"It definitely concerns me - sea levels rising and weather changing," she said.

Eva, 14, said she was most worried about changes in the weather. 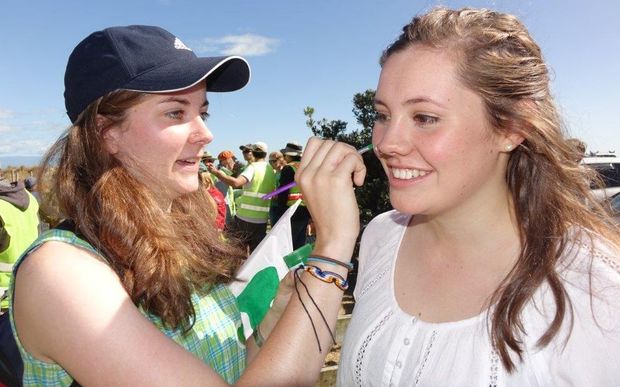 Nelson students Sophie Ross (left) and Maya De Larratea get into the spirit of the march with some face painting at Tahunanui Beach this morning. Photo: RNZ/Tracy Neal

The New Zealand government was going to Paris with woefully inadequate targets, he said.

"They really are lagging behind the rest of the world, and in fact everyone in New Zealand. Individuals, organisations, businesses, they're taking action, but the government is dragging the chain."

Marches were also planned for other towns in the top of the South Island including Motueka, Blenheim and Westport and another was to take place in Takaka tomorrow. 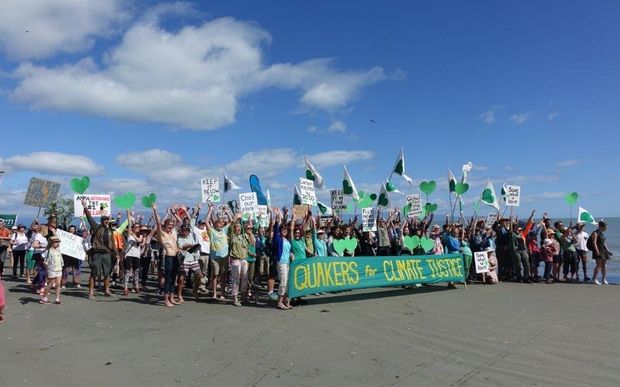 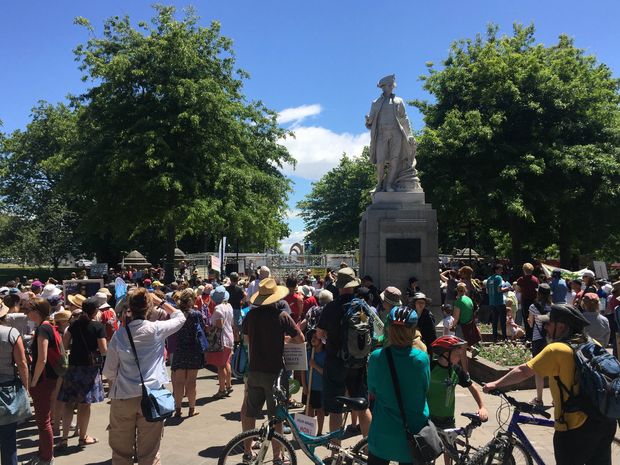 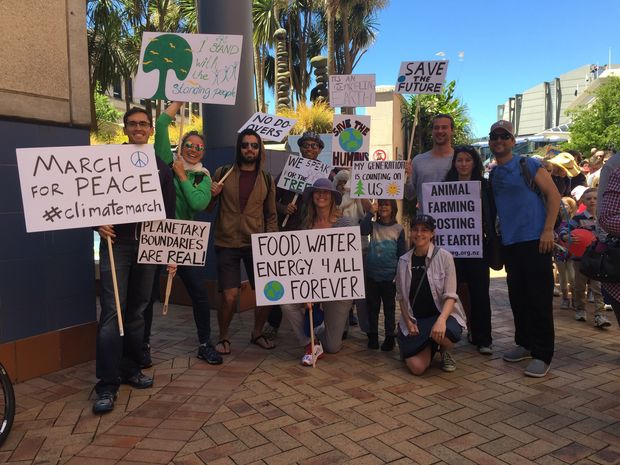